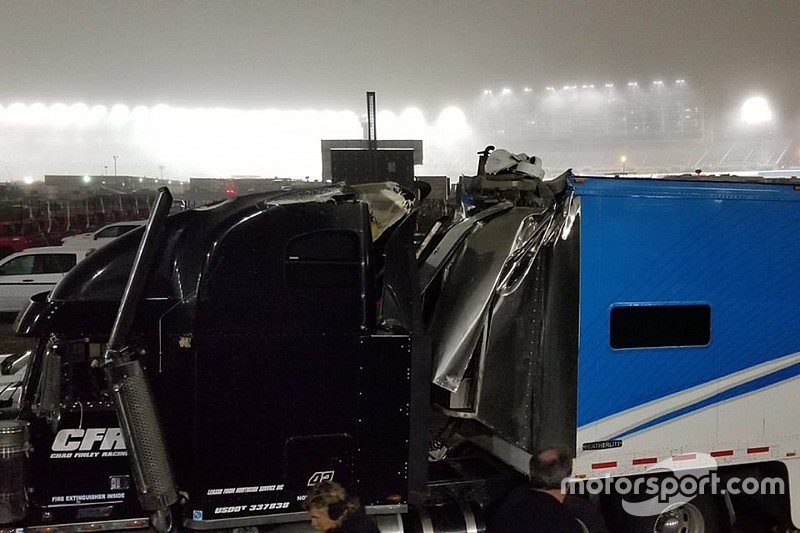 A freak accident with its hauler at Atlanta will prevent Chad Finley Racing from participating in this weekend’s NASCAR Truck race at Las Vegas.

Following Saturday night’s Truck race at Atlanta, CFR’s hauler – and the trucks inside it – were damaged as it attempted to leave Atlanta Motor Speedway’s Turn 3 tunnel.

On Monday night, the team announced it would forgo this weekend’s race at Las Vegas Motor Speedway and focus on repairing its hauler and the damaged trucks that were inside it.

Florida-native Robby Lyons was scheduled to drive the team’s No. 24 Chevrolet in Friday night’s race.

“After surveying it all, as our primary Vegas truck was also damaged and reviewing all of our options, we have decided to forgo Las Vegas and begin working on repairing our hauler and race trucks,” said team principal Jeff Finley.

“We’re disappointed that we are having to adjust our schedule to early in the season – but the hauler incident made it impossible for us to get to Las Vegas efficiently as it was scheduled to leave Monday morning.”

“Trust me when I say that racing is our lives and this setback will make us even more determined to get back to the track in the coming weeks.”

After Las Vegas, the next Truck Series race is not until March 23 at Martinsville (Va.) Speedway.

Chad Finley raced for the team at Atlanta. He was involved in a wreck on Lap 117 of 130 and ended up finishing 28th.

Chandler Smith to compete in NASCAR Trucks with KBM