ARCA racing series winner has high hopes for getting back behind the wheel of the No. 51 Toyota Tundra at Pocono

MOORESVILLE, N.C. (July 30, 2013) - Since making the announcement to drive for Kyle Busch Motorsports (KBM) behind the wheel of the No. 51 Tastee Apple/Ingersoll Rand Toyota Tundra in four NASCAR Camping World Truck Series (NCWTS) races in 2013, Chad Hackenbracht has had the 2.5-mile "Tricky Triangle" circled on his calendar. As the 2012 winner of the ARCA Racing Series August race, the 21-year-old New Philadelphia, Ohio native is ready to get back behind the wheel of the No. 51 Tundra and this time, he's looking for redemption at one of his favorite tracks - Pocono (Pa.) Raceway.

Hackenbracht, who made his NCWTS debut behind the wheel of the No. 51 machine at Texas Motor Speedway in Fort Worth, had high hopes leading up to his debut at the 1.5-mile track. However, an accident on lap 41 of 167 ended his night early and relegated the rookie to a 26th-place finish. 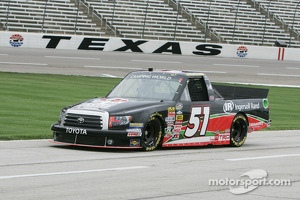 Fortunately, for "@Hockensomethin" he enters his second career Truck Series event with something he didn't have at Texas - seat time. Although he will sit behind the wheel of a Toyota Tundra for the first time at Pocono, the Truck Series rookie has completed 356 laps around the 2.5-mile superspeedway in the ARCA Racing Series. As a challenging three-turn track, Hackenbracht feels confident that his KBM team, strong equipment and experience will take him places at Pocono. Instead of spending a lot of time getting to know his Toyota Tundra and finding his way around the unique track, he will be able to eliminate one variable in hopes of formulating a solid run for his KBM team. His goals; finish the race and gain the most points possible - to help propel the No. 51 team back into the direction of a NCWTS Owner's Championship.

Chad Hackenbracht, Driver of the No. 51 Tastee Apple/Ingersoll Rand Tundra:
What does it mean to get back behind the wheel of the No. 51 Toyota Tundra at Pocono?
"It means a lot to be back in the No. 51 Toyota Tundra, especially at a track like Pocono. I got my first ARCA win there one year ago. I have always run well there, so to be in top-notch equipment this week is going to be great and having Kyle (Busch) at the track as well will be a major plus."

You won in your last visit to Pocono in the ARCA Racing Series. Is this a track that suits your driving style and can you carry your ARCA experience over to a truck for this weekend's NCWTS race?
"Pocono has always been a great track for me and does suit my driving style. I will carry over what I know about driving lines and various characteristics of the track, but other than that it will be a totally new experience in the truck."

What are your goals for your second NCWTS start at Pocono for Kyle Busch Motorsports?
"My first goal is to finish. My secondary goal is to finish in the top 10, which I feel is very possible given the caliber of equipment I will be driving and my past experience at Pocono."

Rudy Fugle, Crew Chief of the No. 51 Tastee Apple/Ingersoll Rand Tundra:
Pocono is one of the most unique tracks that we visit in the Truck Series. What does it take to be successful at the 2.5-mile "Tricky Triangle?" "It's a challenging track. It's fairly flat - Turn 1 is kind of bumpy, but since the repave it's not as bad - and there are three very distinct corners. You have to get through all three of them - there is no compromising a corner anymore - the team that does it the best will benefit the most. It's considered a superspeedway, but there will be no pack or tandem racing - you may have some drafting on the straightaway, but that's it. You will need a truck that handles well - it's very aero dependent, down force and drag will be key."

Chad Hackenbracht's No. 51 Tastee Apple/Ingersoll Rand Tundra:
Chassis KBM-05: The No. 51 Kyle Busch Motorsports team will unload chassis KBM-05 for this weekend's Pocono Mountains 125 at Pocono (Pa.) Raceway - the chassis sixth career start. In its last on-track appearance at Martinsville (Va.) Speedway, Joey Coulter was running solidly inside the top 10 before a pit road infraction just 60 laps into the 250-lap event forced the No. 18 Toyota Tundra to lose valuable track position and ultimately go a lap down to the race leader. However, a strong Tundra and pit strategy allowed the Miami Springs, Fla. native to rally from as far back as 29th to finish 15th at the "Paperclip."