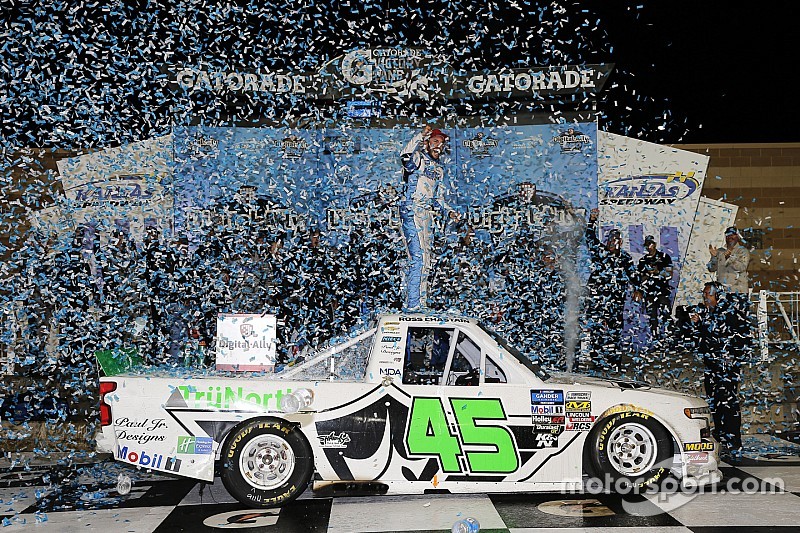 After Stewart Friesen ran out of fuel with less than three laps to go, Ross Chastain inherited the race lead and captured his first career Gander Outdoor Truck Series victory.

After making a remarkable save with less than 20 laps to go, Ross Chastain ended up being at the right place at the right time late in the event.

As Friesen ran out of fuel, Chastain, who was just a few truck lengths back of Friesen, was able to slip by and snag his maiden Truck win.

Chastain, who is the only driver to start every NASCAR national series race this season, picked up his first truck series win in his 66th start.

Friesen and his team only took two tires on their final pit stop due to the miscommunication on not taking four tires which meant his team was not able to get enough fuel in his truck.

Chastain, who has one Xfinity Series win on his resume from last year, was able to hold off Ben Rhodes for the victory.

“This is what sports is all about,” said a jubilant Chastain in Victory Lane. “Comebacks. We had the world by the tail last year and had everything came out against us.

“We’re such a small group and all the guys in the shop and we get a lot of help from GMS but we got it (the win).

Todd Gilliland was third with Austin Hill fourth. Brandon Jones rebounded from an early spin in the race to finish fifth.

On Lap 139 Grant Enfinger and Brett Moffitt brought out the fifth caution of the race when they got together while racing for second place. Both were able to make pit stops and continue in the race.

Crafton led the way from the pole and remained out front for the first eight laps of the race before Stewart Fiesen took the lead on Lap 9.

Friesen, who was fastest in both practice sessions earlier in the day moved into the lead after starting 10th and remained out front until Brett Moffitt took the lead after a restart on Lap 31.

Friesen was able to get back around Moffitt one lap later where he remained out front until the end of Stage 1 on Lap 40. Moffitt followed in second with Enfinger, Chastain and Hill rounding out the top five.

Rounding out the top 10 were Crafton, Gilliland, Creed, Burton and Ankrum.

Friesen was able to collect the Stage 2, win holding off Moffitt for the top spot on Lap 80. Friesen restarted the second stage in fourth and was able to work his way back up to battle for the lead in just nine laps.

Enfinger was third with Chastain and Creed the top five. Crafton, Gilliland, Hill, Ankrum and Rhodes completed the top 10.

After taking the lead on the restart on Lap 60 after starting 13th in the race Grant Enfinger was able to stay out front until Lap 69 when Friesen got back to the point and Moffitt followed him in second moving Enfinger back to third.

Sheldon Creed and Austin Hill took two tires during the pits stops prior to the start of stage 2 to get track position where Creed remained out front until Lap 59.

The third caution of the race was given to the field on Lap 52 when she spun coming out of Turn 4 and slid into the grass in the infield that dug her truck in the ground causing significant damage to her No. 54 truck.