The young talent joins an establish team for the Truck season. 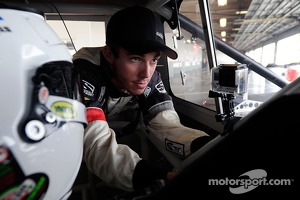 The team has switched manufacturers for its BTS Tire and Wheel Distributors/National Watermelon Association/Goodyear FleetHQ/Wynn's Truck Series entry and will be running Ford F-150's powered by Roush-Yates Engines beginning with the NextEra Energy Resources 250 at Daytona (Fla.) International Speedway later this month.

From 2010 to 2013, RBR Enterprises fielded Chevrolets in the Truck Series.

"RBR had a long, successful, championship-winning history with Ford Motor Company before coming to the Truck Series in 2010," Ricky Benton, RBR Enterprises team owner, said. "We have grown our truck program over the last four years and feel like partnering with Ford is the best move to help us continue to grow."

RBR Enterprises ran Fords in the Pro Cup Series and various NASCAR touring series for more than 20 years prior to joining the NCWTS in 2010.

RBR Enterprises will also have a new driver behind the wheel in 2014. Ross Chastain, who had a break out year in 2013, will make the move from Brad Keselowski Racing to take over driving duties of the No. 92 Ford. The 21-year old Alva, Fla. native has competed in 41 Truck Series events with two poles and 231 laps led en route to five top-five and 12 top-10 finishes.

"After a successful 2013 season, I knew I needed to make the right move," Chastain said. "Aligning myself with Ricky Benton and continuing my relationship with the Ford Racing family felt like a move in the right direction for me. Everything came together a little later than we expected but Ricky (Benton) is putting all the right parts and people in place to have a strong year."

Calling the shots for the No. 92 RBR Enterprises Ford is veteran crew chief Trip Bruce.

Bruce has 13 wins as a crew chief and a NCWTS championship with driver Johnny Benson Jr. in 2008. The team plans to run 10-12 races, depending on sponsorship. Chastain and Bruce have worked together in the Truck Series previously. The duo paired up for three races in 2011.

"Timing was everything with this deal coming together," Bruce said. "Ross wanted to stay with Ford and Ricky (Benton) was making the switch to Ford, so it made sense for everyone."

Owner, driver and crew chief have high expectations for the team in 2014, but each cited constant improvement as the true metric for success.

"Our goal is to be competitive and to win races," Bruce continued. "I feel as though we have the parts and pieces in place to run in the top 10 consistently and be in a position to win races. We are looking to grow each time we go to the track. If we are improving each time out, that's success."

"I have the utmost faith in Ross (Chastain) and Trip (Bruce) to make RBR better than we have been," Benton said. "They have each had success in this series and have worked together before. That relationship is something that we can build on this year."

"Our goal is to improve each time we go to the track," Chastain said. "The core pieces are there at RBR, we just have to get them polished up and put together to run as fast as we can. I have a ton of confidence in Trip (Bruce) and Ricky (Benton) to give me what I need."

The No. 92 RBR Enterprises Ford will carry primary sponsorship from BTS Tire and Wheel Distributors and National Watermelon Association. Associate sponsors for the entry will be Goodyear, FleetHQ and Wynn's.

The team plans to run 10 to 15 races in 2014, but the schedule could expand if additional sponsorship can be secured.