WHITT WINES AND DINES THE LADY 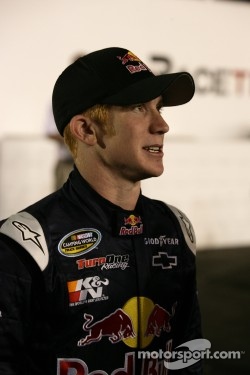 DARLINGTON, S.C. — Cole Whitt swept the Lady off her feet on Saturday.

The 19-year-old Red Bull rookie was fast in first practice. And even faster in the second. Whitt won the pole, too, his first in only four NASCAR Camping World Truck Series tries. Still, it wasn’t quite enough on his first date with Darlington Raceway — the 1.366-mile, egg-shaped oval commonly known as the Lady in Black because of her deceitful knack for fatally kissing right sides.

Driving Turn One Racing’s No. 60, Whitt finished eighth in the Too Tough To Tame 200. That finish backed up a sixth at Phoenix and a 14th at Daytona. Do the math after three races, and Whitt ranks second in the championship standings — six points behind veteran Matt Crafton.

“We come to the race track to win races,” Whitt said, “and that was clearly what we came to do at Darlington.” Red Bull Racing Team driver Kasey Kahne, spending his Sprint Cup off week not on an exotic island somewhere but instead in Kyle Busch Motorsports’ No. 18, won Saturday’s race. He started alongside Whitt in the second position and went on to win his third Truck race in only four career starts. Do the math again, and Kahne’s batting .750 in a truck.

He held off Todd Bodine during a late-race restart, which, after leading a race-high 95 laps, became the deciding factor in an event that had a record 10 caution flags.

“I came here this weekend wanting to win — that was the plan,” said Kahne, whose No. 4 Red Bull Toyota cranks up again Friday at Bristol. “This is a tough series. This is one of my favorite race tracks, and I’m really glad I came.”

Back to Whitt, who if you read beyond the box score had a race full of hurdles. He was leading from the pole — earned by a track-record lap of 173.933 mph — came in early with others and came out behind nine other trucks. Lug nuts were the culprit that caused Whitt’s truck to fall back in traffic, and from there he spent the middle two-thirds of the race fighting dirty air and trying to maintain pace. He dropped to as low as 26th.

Once the team corrected a throttle issue during a pit stop on lap 92, Whitt and the No. 60 were their usual selves — fast. He immediately bested Kahne’s fastest lap with one of his own and charged into the top five.

“I’m happy. We finished really good and overcame a lot,” he said. “I told everyone that we had a good truck. We made the truck the way we wanted it and raced the race track. We had our own plan and could race with everyone. We showed that we could come back and have a truck that was capable of running right up there. We’ll just try to keep winning races.”