Two-time NASCAR Truck series champion returns to Pocono in the No. 30 Chevrolet.

All season long Joey Coulter looked forward to the inaugural Mudsummer Classic at Eldora Speedway. Coulter, who has experience on dirt tracks, knew he could have a chance to run well at the historic track and it showed last week in Ohio.

Although Coulter didn’t win the event at Eldora Speedway in Rossburg, Ohio, he was the highest-finishing NASCAR Camping World Truck Series regular (fourth). Coulter, who also competed in the invitation-only Late Model event prior to the trucks hitting the track, strategically made his way through traffic and finished in the top five after starting 11th in the star-studded field.

The fourth-place showing was his best finish since a second at Kansas in April. It was also his second consecutive top-10 finish, and fourth this season for Kyle Busch Motorsports. 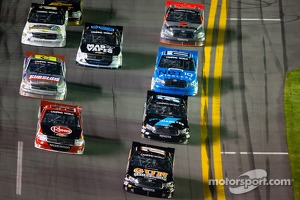 The Miami Springs, Fla., native now sets his sights on Pocono (Pa.) Raceway, where he picked up his lone series win last year. Coulter moved up from his fourth-place starting position in last year’s race at Pocono and took the lead on lap 44 of the 50-lap event. The win came in his 36th career NCWTS start.

The Tricky Triangular suits Coulter’s driving style, as he finished sixth in his only other truck start at the Long Pond, Penn. track. Last week’s solid performance also moved Coulter up one spot in the points standings to 12th.

Matt Crafton’s impressive streak of 10 top 10s in each of the first 10 races this season is still intact and his lead over Jeb Burton has grown to 48 points.

Crafton has used his consistency to propel him past teammate Johnny Sauter after the fourth race of the season and he hasn’t looked back since. Crafton also picked up his first series win since 2011 and became a father for the first time this spring – the only thing left for a personal trifecta would be his first NCWTS title. 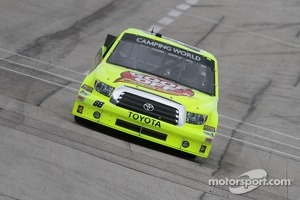 One of the many drivers on his heels is Jeb Burton. Burton moved into second place in the standings after Charlotte and has remained behind Crafton ever since.

Two-time series champion Todd Bodine will return to action with a new team at Pocono, driving the No. 30 Turner Scott Motorsports Chevrolet. Bodine began the season driving the No. 13 truck for ThorSport Racing scoring a pair of 11th-place finishes at Daytona and Martinsville, respectively. Bodine finished 18th in his most recent start at Texas Motor Speedway in June. Bodine will pilot the same No. 30 truck that Kyle Larson took to Victory Lane at Rockingham and finished second to Austin Dillon last week at Eldora Speedway. … Pennsylvania natives Todd Peck and Kyle Martel will attempt to make their first starts of the season at Pocono while Dominick Casola also returns to the series attempting to make his first start since 2010 at Talladega.