Joey Coulter and his fellow NASCAR Camping World Truck Series (NCWTS) competitors embarked on new territory for the 10th race of the Truck Series season Wednesday night. For the first time in series history, NASCAR's third-tier division made a stop at Eldora Speedway in Rossburg, Ohio for the Inaugural Mudsummer Classic - one of the most anticipated races in series history. The historic event - which consisted of a 30-truck starting field and unique qualifying and race procedures - was one for the history books. After 150 laps, which consisted of three segments, Coulter was able to use his dirt-track racing experience to strategically battle his way through traffic and ultimately out duel his Truck Series competitors at the famed .5-mile clay oval. Coulter's No. 18 Darrell Gwynn Foundation Toyota Tundra will go down in the history books as finishing fourth in the inaugural event - the highest finishing Truck Series regular.

Following two practice sessions on Tuesday and a final session on Wednesday, the 35 Truck Series entries were lined up based on speed for a traditional two-lap qualifying session. As the 11th fastest truck in qualifying, Coulter would find his No. 18 Tundra lined up on the inside of the second row in the first of five heat races - which were used to determine the starting position for the main 150-lap feature. 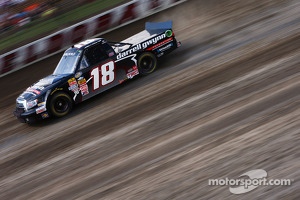 Each heat race consisted of seven trucks - four that were locked in based on owner point standings and three go-or-go-home trucks. Ken Schrader was the winner of Heat 1 followed by Dave Blaney, Coulter, Tracy Hines and Scott Bloomquist. Coulter's third-place finishing position in the heat allowed the 18 machine to line up on the inside of row 6 for the main event.

Starting 11th in the first 60-lap segment, Coulter was forced to work the bottom line and lost multiple positions to trucks using the top of the race track in the early stages of the run. By lap 30 the Gwynn Foundation Toyota Tundra was scored 17th. However, as green flag racing continued Coulter found his way to the top of the track and was able to get back up to the 14th-position when the first of six caution flags was displayed for debris in Turn 4.

Coulter made his way down pit road in the first 15 truck group for four tires and fuel explaining that his Tundra was, "Pretty good - better than what was in front of me." When racing resumed on lap 60, Coulter returned to his 14th-place position before the caution flag was displayed.

Restarting on the outside of row seven, Coulter was able to work the top of the race track in the early stages of the run - passing five trucks by the time the third caution flag was displayed for the end of the second 50-lap segment at lap 110. Coulter's only complaint was that his Tundra "tightened up at the end of the run." Once again crew chief Harold Holly brought the No. 18 machine down pit road for four tires and fuel.

Restarting ninth for the final 40-lap stint, Coulter quickly found his way to the top of the race track and was able to make some ground before a quick caution flag was displayed for an accident involving three trucks in Turn 2. With track position at a premium and passing at a minimum, Coulter made quick work of the trucks in front of him - gaining three positions on the lap-125 restart.

Coulter worked his way past pole sitter, Ken Schrader for the fifth position by lap 133 and was sitting comfortably in the third position when the field was slowed for the sixth and final time on lap 149 - sending the field into overtime. Coulter would lose one spot to Sprint Cup Series regular, Ryan Newman on the restart and took the checkered flag at lap 153 in the fourth position - the talented youngster's second top-five finish of 2013.

The field was slowed six times for 30 laps and the lead was exchanged five times by four different drivers.

Following his strong fourth-place finish at "The Big E," Coulter gained one position in the 2013 NCWTS driver point standings and currently sits in the 12th position with 295 points; a mere 13 points out of 10th, 25 markers behind fifth-place Johnny Sauter and 98 points behind series leader Matt Crafton.

Coulter heads to Pocono Raceway - the sight of his first NCWTS win in 2012 - for the Pocono Mountains 125 on Saturday, August 3. The talented youngster has two starts at the 2.5-mile "Tricky Triangle" including one win and two top-five finishes.