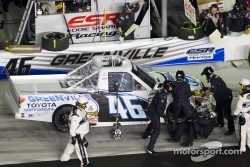 Darlington, S.C. (March 13, 2011)—Craig Goess piloted the No. 46 Greenville Toyota of N.C. Tundra to a 19th-place finish at his first appearance at Darlington Raceway in the NASCAR Camping World Truck Series (NCWTS).

The Greenville, N.C., native qualified in the show in the 27th position and looked to gain experience at the 1.366-mile track. When the green flag dropped on the Too Tough to Tame 200, Goess was prepared to take on the famed Lady in Black.

The caution flag was out early in the event with trouble in turns one and two on the first lap. Goess was able to avoid the trouble, and spotter David Green and crew chief Trip Bruce coached the rookie during the brief break. Both encouraged the driver to remain focused and get into a rhythm around the track.

The green flag waved, and Goess worked his way into the 18th position by lap six. “You’re doing a great job,” said Bruce. “Just continue to race the race track.”

A caution on lap 25 gave the No. 46 an opportunity to come down pit road for the first time of the night. Coming down pit road in the 21st position, the crew gave the Tundra four tires and fuel. The No. 46 was able to gain three spots on the quick stop.

The green flag dropped on lap 30, and Goess remained focused on each lap. When the yellow flag dropped on lap 57 for debris, Bruce called the No. 46 to come in as the leaders peeled off to pit road. The ESR crew once again had a clean stop and put on four tires and fuel.

Goess was running steady in the 16th position by lap 79. The No. 46 came down pit road for the final time on lap 91 for a yellow flag pit stop for four tires, an air pressure adjustment and fuel. Goess restarted in the 17th position on lap 93, and was able to avoid trouble on lap 96 with a four-car incident. The accident on the frontstretch brought out the red flag as track officials cleaned the track.

The green flag waved after a seven-minute red flag, and Goess moved up in the pack to the 12th position by lap 122. Bruce relayed to Goess that he continued to improve lap each lap, and for Goess to continue racing the race track until the final lap.

The final caution of the night flew on lap 139 for debris. The field set up for a three-lap shootout to decide the race, with Goess lining up in the 12th position on the outside line. The green flag waved for the final time, and Goess radioed to the crew that he felt something happen with the truck, and was not able to get a jump on the restart. The No. 46 fell into line in the 19th position.

Kasey Kahne grabbed the checkered flag for the first time in the 2011 NCWTS season. It is the third win in three races with a Toyota Tundra in victory lane. Goess crossed the finish line in the 19th position. Goess was also the third-highest finishing rookie, behind Cole Whitt in eighth and Parker Klingerman in 14th.

“I don't know what happened on that last restart,” said Goess. “There was either air in the fuel lines or an ignition miss. I put the throttle down, and it seemed like nothing happened for five seconds, and then it came back to life. It was disappointing finish, but overall I think we made a lot of headway as a team. I am confident we will continue to learn and grow as a team, and I’m excited to get to Martinsville in a few weeks.”

The No. 46 Greenville Toyota of N.C. team will head to Martinsville Speedway on April 2nd for the Kroger 250.