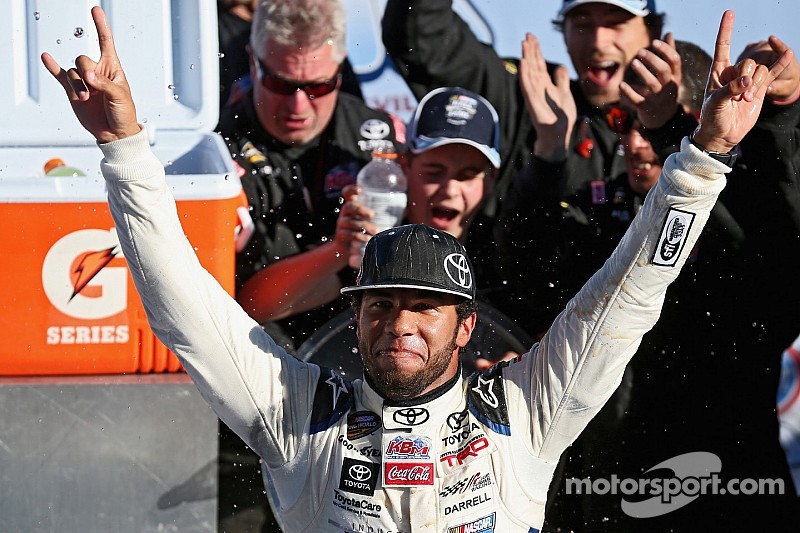 Last year at Martinsville, driving the No. 54 KBM Tundra, Wallace became the first African-American driver to win a race in one of NASCAR’s top three touring series since Scott accomplished the feat in what is now the NASCAR Sprint Cup Series on Dec. 1, 1963 at Speedway Park in Jacksonville, Fla.

I know I had a guardian angel looking over me this weekend,

Though his number was changed to 34 on Saturday, in honor of Scott’s traditional car number, the result was the same for Wallace, who grabbed the lead from Johnny Sauter in heavy traffic on Lap 188 of 200, moments before the record 11th caution slowed the race.

Wallace pulled away after a restart with six laps left and beat Peters to the finish line by .495 seconds. Peters had bumped Sauter out of the way in the closing laps, also opening the door for reigning series champion Matt Crafton, who came home third and extended his series lead to 18 points over fifth-place finisher Ryan Blaney.

“I wasn't worried about anybody, honestly,” Wallace said. “They kept telling me where everybody was, and I said I didn't care. It's our weekend and we're going to come out and take this (grandfather) clock (trophy) home with us and we just did that.

“That was so fun. Martinsville is my favorite place to come to. Without the support of NASCAR and Toyota… the whole Wendell Scott family is here and this is a special moment, just a perfect weekend for us. It's a true honor to have Wendell Scott on our Toyota Tundra and to be able to put it in Victory Lane. I know he (Scott) just said up there, 'Hell yeah.' This is cool.”

Wallace said Saturday’s win surpassed his first victory in the series at Martinsville a year ago.

“It means a lot--I know I had a guardian angel looking over me this weekend,” said Wallace, who took over third place in the series standings, 22 points behind Crafton. “To be able to put it in Victory Lane, you couldn't ask for a better weekend. You thought last year was special, but this definitely beats it.”

Upset with what he deemed roughhouse tactics from Peters, Sauter attempt to confront the runner-up on pit road after the race, but NASCAR officials and crew members kept the drivers apart.

“But it is what it is. I don’t want to waste too much of my breath on that. We’ll just focus on how well we ran today…”

Wallace led 97 of the 200 laps. Second was the pace car, which was out front for a record 71 laps during a race that featured more rookies than veterans and six drivers competing in the series for the first time.

Erik Jones ran fourth, followed by Blaney, Tyler Reddick, Sauter, Matt Tifft (a UNC-Charlotte freshman making his first start) Alex Guenette and German Quiroga, whose ill-fated attempt to take the lead in heavy traffic on Lap 188 caused his No. 77 Toyota to spin and brought out the 11th caution, solidifying Wallace in the lead.