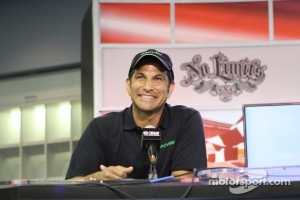 What does it mean to be making your 300th Camping World Truck Series start this weekend?

"It's an honor and I'm excited. I really didn't realize I was at 300 until last week when Ray Dunlap came up to me before the race started and said, 'Hey, congratulations next week on your 300th start.' And, I said, 'It's 300?' I didn't even really know. That being said, ever since I was three years old going to the race track with my father, this is what I've always wanted to do in life. Life is pretty good. I feel like I've been blessed and privileged and honored to be a part of such a great sport."

How would you compare your milestone of 300 starts to Todd Bodine's of 200 starts in all three NASCAR series?

"I think what Todd (Bodine) has accomplished -- 200 in all three national major series -- that's just incredible. I don't believe anyone else has accomplished that. Three hundred in the Truck Series, I feel blessed and honored -- that's pretty cool. It really doesn't compare to 200 starts in the NASCAR Camping World Truck Series, in the NASCAR Nationwide Series and the NASCAR Sprint Cup Series. I wouldn't say -- that's night and day difference. That's a major, major milestone for Todd Bodine. I remember racing dirt Late Models and racing everything I could race. I always wanted to get home wherever I was racing to watch the Cup race on Sunday and I was usually watching Todd Bodine out there. This milestone compared to Todd's, I think it's night and day difference. To accomplish that goal -- that's a major accomplishment and I think I heard or read that I don't think any other driver in our sport has that. That says a lot about his longevity, his competitiveness -- he can win any given weekend no matter if he's in a Nationwide car, a Sprint Cup car or a truck. It doesn't compare."

What would it mean to become the all-time Camping World Truck Series starts leader?

"I hadn't really thought of it. I would love to be the all-time leader, but I would really love to just have the budget to do it like I once did and have the financing behind me to be able to win races again. Being the all-time leader with starts would be a tremendous goal. Rick Crawford has it at 331." 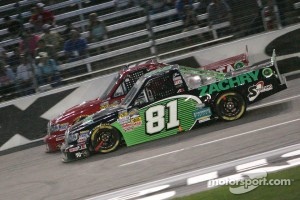 What are the track conditions like and what is the curve in the backstretch like at full speed?

"It's awesome. Every body says, 'Hey, what's your favorite -- what race tracks do you like?' I always say, 'Where are we going next?' Chicagoland is a great track. I love it because it's challenging. Its got character to it. It's a mile-and-a-half track, it's different from the other ones because the back straightaway is not straight -- it curves the whole time. It's pretty cool. As you enter turn one, there's two or three grooves you can use throughout the race. There's some bumps over there on turn one that create a challenge for you as a driver and the crew chief and the engineer to try to figure out how to get through them. Also, in turns three and four, there's multi- grooves over there. The fast way around here is bumpy and if you can get your truck to travel through the bumps without affecting it, it's awesome. It's a great race track and having that characteristic to it, where it's not just perfectly smooth all the way around it, makes it a lot of fun. You can pretty much run wide-open in the trucks -- every lap I've made, I've ran wide open. I'd hit a bump and the front end is a little rigid, so it would kind of pick up the front tires and make us tight, then we'd work on it and we'd go back out there and we'd hit the bumps again and when we'd land, we're wide-open now and we'd go loose. It creates a challenge to make that balance just perfect when you're traveling through the bumps. There is no straightaway here at Chicagoland."

Do you think Chicagoland would benefit from a repave?

"It's kind of like Atlanta Motor Speedway -- if it's not broke, don't fix it. It looks wore out and it's bumpy and it has a lot of dips in it, but it makes the racing really good. It's challenging. When you have to come off the gas pedal, and the trucks with the restrictor plates we run, a lot of times we can run wide-open, but the race tracks that have the characteristics with the bumps, it just makes it more challenging and sometimes you have to come off the gas pedal. It makes the racing better. If you have a race track that the surface is perfect 100-percent, it's just smooth all the way around, I think personally it takes a little bit of the racing -- I don't think the racing is as good. I like the race tracks that have character to it. I think it creates better racing myself, personally. I love this track and it doesn't need to be repaved. It's fun, it's challenging -- a great track."

The feel-good story from Daytona no one is talking about