DENNY HAMLIN
Tackling the "Tricky Triangle" in his Teammate's Tundra 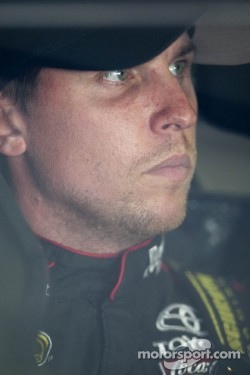 MOORESVILLE, N.C. (July 31, 2012) - Denny Hamlin will make his first NASCAR Camping World Truck Series start of 2012, driving the No. 18 GNC Franchising Toyota for Kyle Busch Motorsports (KBM) in Saturday's Pocono Mountains 125 at Pocono (Pa.) Raceway. KBM's flagship Tundra will be sporting a new primary sponsor this week, GNC Franchising. Headquartered in Pittsburgh, Pa., GNC Franchising has been the No. 1 Vitamin Retail Franchise for 22 years in a row with more than 7,100 retail locations throughout the United States and 45 international markets.

If racing at the track dubbed as the "Tricky Triangle" was a college class, then Hamlin would definitely be the "Professor of Pocono." The Virginia native achieved immediate success at the 2.5-mile Tri-oval, sweeping both races from the pole as a Sprint Cup Series rookie in 2006. Over 13 career Cup Series starts at the venue, the 31-year-old driver has totaled four wins, eight top-five and nine top-10 finishes. He has one previous Truck Series start in the Keystone State, posting a ninth-place finish in the inaugural event in 2010.

Hamlin, who has competed in 13 career Truck Series races, made two starts in his Joe Gibbs Racing teammate's Tundra during the 2011 season. In his KBM debut last October, he became the 23rd driver in history to collect at least one win in each of NASCAR's top three divisions when he drove the No. 18 Toyota to victory in the Kroger 200 at Martinsville (Va.) Speedway. He returned to the truck for the series finale at Homestead-Miami (Fla.) Speedway last November, and came home with a runner-up finish in the rain-shortened event.

The third-year team is hoping that Hamlin's expertise at the "Tricky Triangle" can help propel them to their first win in the Pocono Mountains, as the challenging three-turn track is one of just seven venues on the 2012 Truck Series schedule where KBM has yet to claim victory. The No. 18 Tundra has come up one spot short in each of its first two Truck Series starts at Pocono Raceway - Kasey Kahne piloted the team's Toyota to a runner-up finish in the inaugural event and owner-driver Kyle Busch duplicated that finish in last year's race.

Denny Hamlin, Driver of the No. 18 NCWTS GNC Franchising Tundra:

Are you looking forward to driving KBM's No. 18 Tundra at Pocono? "I really enjoyed driving the No. 18 Tundra for KBM the couple of races I did last year and I'm looking forward to working with Rick, Eric and all the guys over there again. I had been trying to get my name in the record books as one of the drivers to win in all three series -- doing one or two races a year -- and I was finally able to achieve that goal with KBM. If it wasn't for the rain at Homestead, we probably would've been two-for-two -- we had a really good truck and I was taking care of it waiting to make my move, when the skies opened up. Pocono is obviously one of my better tracks, so I think that we'll have a good shot at adding another banner to the rafters at Kyle's shop."

How do you approach each corner at Pocono? "In Pocono you have to be very disciplined as you enter turn one. They have marks on the side of the wall and you want to discipline yourself to use those marks so you don't overdrive the corner. You try to get all the exit speed off of (turn) two as you can to try to get that long run right before you get to the tunnel turn. For my approach, I try to arc into the tunnel turn just as wide as I can to make sure I get that long, low line on the exit of the tunnel, to make sure I get a good line into Turn 3. Into Turn 3, you're just trying to carry all that speed you can because that front straightaway is so important for passing that you have to get position on a guy off of Turn 3."

How will the repave affect the Truck Series race this year? "From what we saw in the Cup race there earlier this year, the racetrack is so much smoother. You're going to have more speed and everyone will be a lot closer speed-wise, which will make track position and pit calls more important this year. You're going to have to stay up front because it will be really hard to get back through the field if you make a mistake and don't keep your track position."

Chassis KBM-9: Saturday's race will be the fourth time on the track this season and sixth career start for KBM-9. KBM-9 is the same Tundra that Hamlin drove to a second-place finish in the rain-shortened 2011 Truck Series finale at Homestead-Miami (Fla.) Speedway last November. The last time the Toyota was on the track, Jason Leffler finished eighth in the American Ethanol 225 at Chicagoland Speedway in Joliet, Ill. Leffler also posted a season-best fourth-place finish for the No. 18 team with the truck at Charlotte (N.C.) Motor Speedway in May.

Owning a V8 Supercar team can lead to joy and headaches