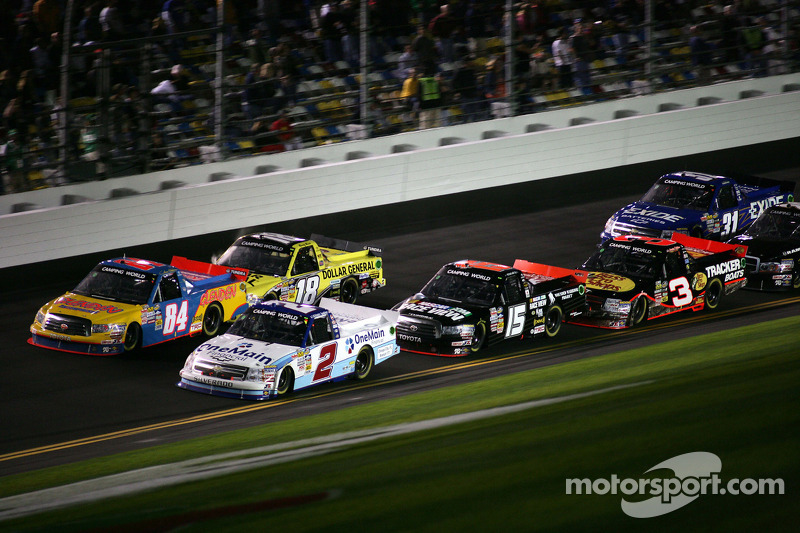 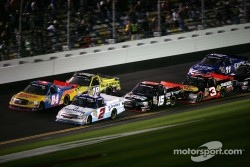 DARLINGTON, S.C. (March 14, 2011) --- On an off weekend for the NASCAR Nationwide Series, Elliott Sadler slipped behind the wheel of the No. 2 Armour Vienna Sausages Chevrolet Silverado as the NASCAR Camping World Truck Series rolled into Darlington (S.C.) Raceway. Sadler started his first Truck Series race at the track dubbed "Too Tough to Tame" from the eighth position. After leading 16 laps a late-race incident with Cole Whitt and a flat tire as the checkered flag flew relegated Sadler to a seventh-place finish.

The Too Tough to Tame 200 began with a caution on lap one for an accident in turn one involving seven trucks. NASCAR was able to quickly return the field back to green on lap four and continued under green until the second caution of the evening waved on lap 15. Back under green-flag conditions, Sadler was able to gain two positions before the first round of pit stops began on lap 27 with the third caution period. The No. 2 Armour team took on two tires and fuel and a solid pit stop placed Sadler in the lead for the restart on lap 30. The driver held on to the lead until the next caution flag waved at lap 35. The team opted not to come to pit road to keep the lead position, but was shuffled from the top spot on the restart.

Sadler held the fourth position until the next caution period came at lap 57. The team decided to use the opportunity to bring the No. 2 Chevrolet down pit road for four tires, fuel and a chassis adjustment. Sadler took the lap 62 restart from the ninth position.

Slowly working his way back up to the front of the field, Sadler rode in the seventh position when the next caution flag waved on lap 73. The No. 2 Kevin Harvick Inc. (KHI) team was not in their fuel window and decided to remain on the race track. Only 17 laps later the caution waved once again bringing everyone to pit road for the final pit stop of the evening on lap 92. Crew chief Bruce Cook made the call for a two tires and fuel pit stop and with another solid stop by the No. 2 team Sadler was back in the lead position for the restart on lap 95.

Just as the field was back to green with Sadler in the lead, the caution flag waved for the ninth time for a hard crash on the front stretch which resulted in NASCAR bringing out the red flag. The caution laps afforded the No. 2 team the laps they needed in order to make it to the end of the race on fuel and back under green-flag racing conditions Sadler fought to keep his lead position. The caution flag flew again on lap 116 for debris in turn one. Sadler's truck became extremely tight on the restart pushing up the track as he attempted to turn down into the corner in turn one losing several positions. As he worked his way back toward the front, he attempted to pass the No. 60 of rookie Cole Whitt when the two trucks made contact. The No. 2 truck sustained front-end damage causing the front splitter to bounce off the track but the field stayed green and neared the end of the 147-lap contest. Sadler radioed to the team he believed he had a tire going down but he held on and brought the No. 2 across the finish line in the seventh position.

Kasey Kahne went on to win his third Truck Series race in five career starts. Sadler's KHI teammate Ron Hornaday finished second followed by Todd Bodine, Matt Crafton and James Buescher. The Truck Series takes a will head to Martinsville (Va.) Speedway for the Kroger 250 on Saturday, April 2 at 2:00 pm, EST on SPEED. Kevin Harvick will climb behind the wheel of the No. 2 Chevrolet Silverado to defend his win one year ago at the paperclip-shaped short track.