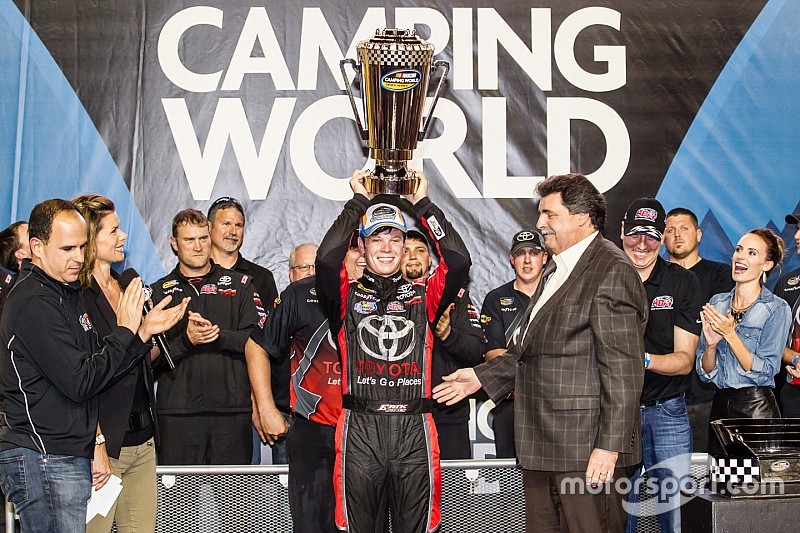 Matt Crafton capped the 2015 NASCAR Camping World Truck Series season with his career-best sixth victory of the season, but it was not enough to earn his third consecutive series championship.

That honor went to Erik Jones, who cemented his first series title in Friday night’s Ford EcoBoost 200 at Homestead-Miami Speedway with a sixth-place finish. Jones was assured of the title if he finished 15th or better.

After a disastrous wreck last weekend at Phoenix, Crafton had only a minuscule chance at repeating as champion – which would have required terrible races by both Jones and Tyler Reddick.

Even without the championship, Crafton called the year a “dream season.”

“The six wins, all the laps we led. We just had too many mistakes. I’ve made mistakes, we’ve all made mistakes. We’re all human,” Crafton said. “In 2016, we’re going to be strong for it.”

The win is the 11th of his career, all coming at ThorSport Racing.

Jones’ championship was his first in NASCAR and the first driver’s title for Kyle Busch Motorsports, which had previously won three owner’s titles in the series.

“A lot of this comes from being with a great team like Kyle Busch Motorsports and bringing great Toyotas to the race track every weekend,” said Jones, who at 19 years old becomes the series’ youngest champion.

“There were definitely times during the year when I didn’t think we could do this looking back and seeing the deficit we were in. Just being able to pull together and make this all happen at the end of the year – it’s just so special for everyone here.

“I’ve had great three years with these guys (at KBM) and I can’t think of a better way to thank them.”

Team owner Kyle Busch said capturing the first driver’s title was special to everyone at KBM.

“We’ve been in existence for six seasons. It means so much more to help these younger drivers and help these kids coming up through the ranks and see them succeed and be successful,” Busch said. “There is nothing greater than to have that feeling and to build this company from the ground up.”

Reddick finished 15 points behind Jones, making up just four points on his deficit in the season finale.

“We had a great year all year long, but just came up a little short,” Reddick said. “That’s how championships are won, just being consistent week in and week out. We’ve just got to clean up some of our dirty days and I think we’ll be fine.”

Reddick will return to Brad Keselowski Racing next season and once again compete for the series championship in the No. 19 Ford.