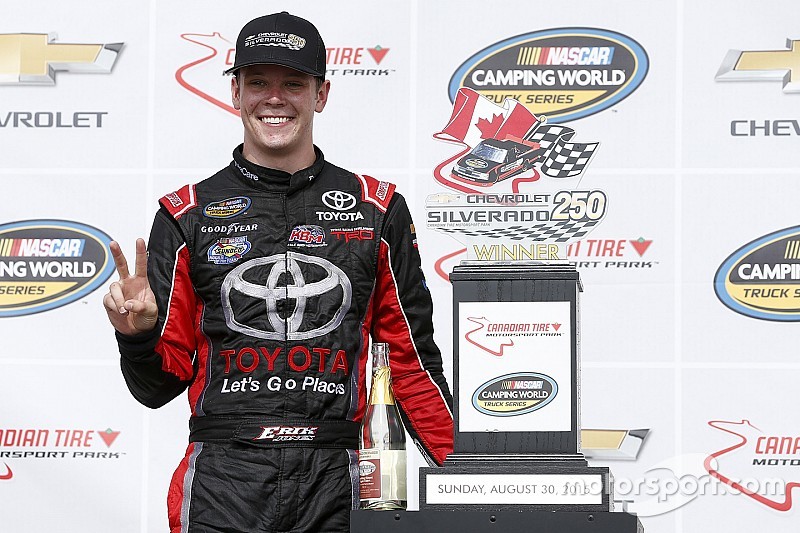 Jones worked feverishly to hold off Alex Tagliani on the final restart until Tagliani fell off the pace and cruised to a win in Sunday’s Chevrolet Silverado 250 at Canadian Tire Motorsports Park in Bowmanville, Ontario.

The win is Jones’ second in the series this season and first on a road course.

“That’s awesome, especially winning with Tagliani here,” Jones said in Victory Lane. “This is a good team – we built it last year and improved upon it this year.

“I knew I had to clear (Tagliani). We were able to clear him and fortunately he (had a problem) going down the hill but I think we could have held him off anyways.”

Tagliani shreds a gear on the final lap

With five of 64 laps remaining, Reddick and Gray Gaulding wrecked in Turn 8 to bring out a caution. On the restart with two laps to go, Tagliani made a furious charge on Jones but fell off the pace when he said he shredded third gear.

“I had some grinding in third gear during the race but as soon as I went to third gear on the back straightaway, it shredded,” Tagliani said. “It was too low in RPMs and a couple of guys got by us.

“It sucks when you race with guys that are in the championship. I see them in front of me and I don’t want to hurt them. You want to pass clean. Nevertheless, it was a fun ride.”

One more restart and Crafton, who has won the past two series championships, said he would have had a shot at the win.

“It really took my truck about a lap or so to get going. Jones and Tagliani would get away from me but eventually I could get a run on them,” he said. “I didn’t really want to see that last caution but a top two finish – that’s not too bad.”

Cole Custer led the most laps (22) but spin after contact with Tagliani with 11 laps remaining. Custer ended up finishing 10th.