Five for five for Busch in trucks

Kyle Busch found the checkered flag in Kentucky, for his fifth win in five starts in 2014.

"I can't say enough about everyone at KBM," Busch said after the race.

"We were okay," Keselowski said. "We were probably a second or third-place truck. We didn't have anything for the No. 51."

Busch started the race on the pole and ended up leading 91 of the 150-laps that made up the race, but it was Wallace who was a mainstay at the front early on. Wallace took the lead from Busch on lap two and ran up front until Busch returned to the lead on lap 36. 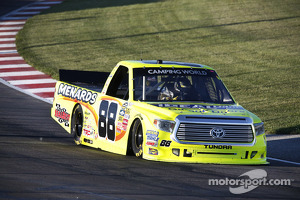 Busch then lost the lead because of varying pit strategies during the fourth caution of the race that came out on lap 76. Keselowski had made his way into the top-five after starting in the back and then stayed out during the caution to restart in the lead. With seval other drivers taking only two tires, Busch was relegated to eighth for the restart.

It didn't take Busch long to get back to the front, though, he quickly got back up to third on the restart and then took second from Blaney a few laps later. Soon, he took the lead from Keselowski and pulled away to lead the remainder of the race.

Keselowski was able to keep his truck in the top-three on older tires, but when the next caution came out on lap 99, he left his pit stall with a wrench still attached to his truck, necessitating a return trip to pit road.

Busch was still up front, with Blaney in second and Wallace in third, as Keselowski worked his way back toward the front. The top-three pulled away from the rest of the field as the No. 30 Turner Scott Motorsports Chevrolet of Ron Hornaday struggled to hold on to the fourth spot.

As Hornaday, the No. 88 ThorSport Toyota of Matt Crafton and Peters battled for the fourth and fifth positions, Keselowski closed. Keselowski moved into fourth with just under 30 laps remaining, but was 12 seconds behind Busch and the lead.

Keselowski then gave back the positions gained to head down pit road for tires during the final yellow flag of the race with 11 laps to go. Meanwhile, Busch restarted with the lead, and Wallace quickly grabbed second from Blaney.

"We were so equal, whoever was in front of who was going to get the position," Blaney said of losing second to Wallace on the final restart." At first, Wallace was able to challenge his boss for the top spot, but then Busch pulled away, as he had every restart before.

"He's tough every race," Wallace said of Busch. "You've just got to learn from it, and that's what we try to do."

Burton hopes to get lucky in Kentucky