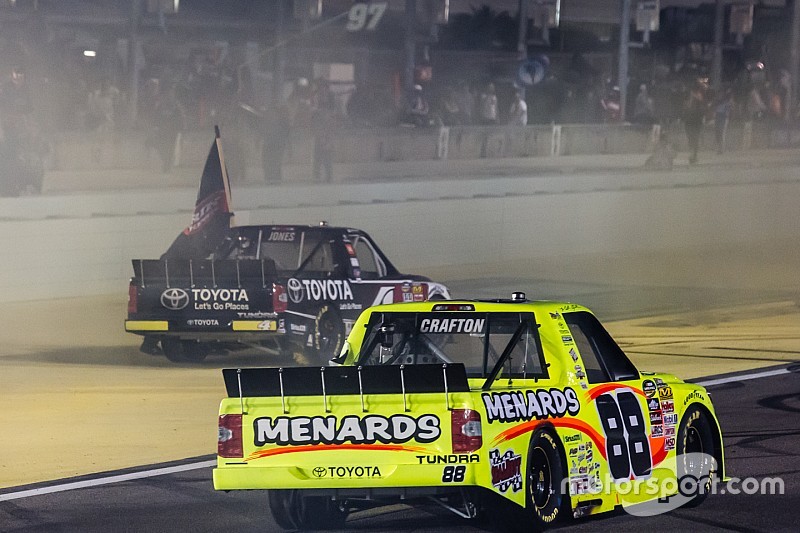 With the 21st NASCAR Camping World Truck Series (CWTS) season complete, here's a look at the five most impressive drivers from 2015.

In this list, I take a look at the five drivers who I believe impressed the most during the 23-race season. A driver must have declared the CWTS as their points-scoring series in 2015 to be eligible for consideration.

Hemric, 24, ending his rookie Truck season seventh in the standings with four top fives, 13 top tens, 18 laps led, and an average finish of 12.2 - the best season ever for NTS Motorsports. Hemric made the big step up to the national ranks of NASCAR with ease, running consistently and keeping his nose out of trouble, completing 22 of 23 races. His performance even earned him the opportunity to race for Brad Keselowski in 2016.

Speaking of BKR ... This 19-year-old nearly stole the show this year, coming just 15 points short of the championship. Reddick won the first race of his CWTS career in the season-opener at Daytona, scoring more top five finishes than any other competitor this season (14) and posting a stellar average finish of 6.3. He even beat his boss in the four races Brad ran this past year.

The veteran driver may have failed to capture a third consecutive title, but despite this, 2015 was by far the best season of his long career. He outdid himself in almost every category - wins, top fives, top tens, poles, and laps led. In the first 338 Truck starts, Crafton managed to win just five races. In the 23 races run this year alone, he emerged victorious six times. And if not for three races where he crashed out, the 39-year-old would have likely been crowned champion for a third straight year.

Yes, I put the 19-year-old and newly crowned series champion in the number two slot on this list, and that's nothing against Jones but more of a nod to the driver who took the top spot. Jones' talent can not be understated. Three wins, 11 top fives, 20 top tens, five poles, nearly a thousand laps led and an average finish of 6.3 launched him to the title, becoming the youngest champion in the history of the series.

If you tried to find Nemechek in the points chart posted above, you'd be out of luck. But you have to look beyond the stats alone to understand why the son of Joe Nemechek topped my list as the most impressive CWTS driver in 2015. The 18-year-old only ran 18 races because he was too young to compete on bigger circuits while he was still 17. Racing for the family team in a usually unsponsored truck and with 14 full-time employees, Nemechek managed to win at Chicagoland and end the year with back-to-back runner-up finishes. With eight top fives and eight top tens, he also posted an admirable average finish of 9.3 with little experience.

With the odds stacked against him, Nemechek stepped up to the plate as a rookie driver and performed at an incredible level. That is why I have no problem naming him the most impressive Camping World Truck Series driver in 2015.

Austin Wayne Self to join the NASCAR Trucks in 2016