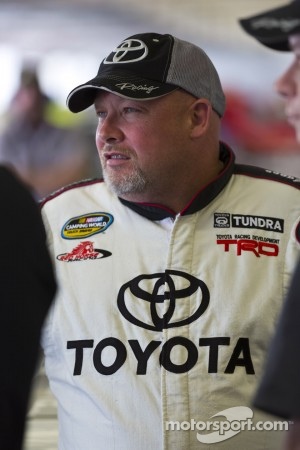 How special is to make your 200th start in the Truck Series?

"It's pretty cool to be able to earn a living doing what you love to do, and it's 200 in all three series. The longevity and actually having people that want you around for that long a period is pretty cool and I never thought when I drove my first race car in -- when was it, 1983, Stafford Springs, Connecticut -- that I would be at this point and having such a great career with a fair amount of success and a lot of friends and it's been a great ride."

"Everybody talks about the mile-and-a-halves all being the same -- 'D' shaped, long, sweeping corners -- and in that respect they are, but in just about every other aspect they're different. Every race track has its own personality, has its own bumps, its own quirks, its own spots on the track that you get tight or you get loose, and Chicago is no different. There are different kinds of bumps. You can run different grooves and every one of the mile-and-a-halves have something that makes them unique to themselves. That's probably the one reason as a driver we don't get tired of them is because they are all different. They all drive a little different and they're different -- a lot of fun in their own way.

How have you adapted to changes in NASCAR throughout your career?

"The sport has changed a lot. There's no doubt about it. The technology and the things that we do behind the scenes are very different than when I started. When I started, I think my first team we had four full-time employees and we had two cars and three motors and worked out of a two-car garage. Now, it's not even close to that. You have -- heck, most teams have one engineer, one tire guy and the crew chief -- I mean, you have specialized for every position, so those things have changed a lot. And the technology that the manufacturers have brought to the sport -- usually it starts in the Cup Series and it will trickle down and it comes to the Nationwide and gets into the Truck Series, so we're benefiting from all the technology that the Cup guys have and use. But, the one thing that hasn't changed is sitting in that seat holding that steering wheel. It's still about turning left and going as fast as you can go. And I think that's one thing a guy like myself that grew up working on race cars and building race cars -- it's one reason we can still be competitive week in and week out is the understanding how to do that and do that with some success and do it consistently.

"For myself, I grew up working on race cars, building race cars. I crew chiefed them. I changed tires on pit road. I was the chassis specialist, so for myself in getting all this new technology that we have, I've been able to for the most part understand it and adapt to it and use it to my benefit with communication to the crew chief, communication to the engineers and all the other ways that we can use it to benefit the team. So, even though I am senior member around here, or one of the senior -- (Ron) Hornaday's actually got me beat for that -- we still can do it. We can still adapt to it and understand it."

Why do you have such a passion for helping young drivers?

"When I started full-time in 1991 in the Busch Series, I was fortunate enough to have two brothers that had a lot of experience, a lot of wins racing in both divisions and they helped me a lot. There was no doubt. But, they couldn't always be around to help me. When we would go to a race -- it didn't matter where it was -- the one guy that always helped me, the one guy I knew I could go to and count on was Mark Martin. I could ask him any question about chassis, lines, how to drive -- I could ask him anything and he would tell me a straight up answer and be honest with me and try to help me. A lot of guys -- some guys I will say -- won't do that. They don't want to help their competitor get better. Well, I've always looked at it as first I wanted to kind of pass that down -- how Mark treated me and how Mark welcomed me and helped me get better. I always wanted to do that for the kids, but I wanted to do it because I want them to be a better driver because my philosophy has always been that you are only as good as the competitors you race against.

""So, if you can make your competition better and you can still beat them, well, you've accomplished a lot. I want those kids to go out there -- I don't want them to get in trouble, I want to help them. And, it is different in today's world. You have got to perform, you've got to fulfill what you are supposed to do behind the wheel and if I could help a kid do that I'll do that. I just always have taken a lot of satisfaction in helping the kids."

Do you feel there are still drivers out there willing to help the up-and-coming drivers?

"I hate to put it this way, but it is the older generation. It is our senior generation in this sport that still understands that aspect and respects that part of the sport. In today's world, it's such a competitive business not only on the race track but off the track for sponsorships, for media exposure. Everything we do is about competition and I think this generation maybe isn't as willing to go that extra mile to help their competitor or their neighbor. I think that's one thing that our sport lacks now."

What does your team owner Tom DeLoach bring to the race team that makes it so successful?

"I've known Tom (DeLoach, Red Horse Racing owner) for -- we've been friends for probably four or five years now. We are always goofing around in the garage and, 'When are you going to come and drive for me?' I said, 'Well, as soon as I need a job I'll come see you.' Well, last fall that happened and the first place I went was three trailers down to see Tom. I said, 'Tom, I don't have a job for next year.' He said, 'Yeah you do. We're going to have you over here at Red Horse. We're going to make this work.' I said, 'Okay.' That kind of commitment, I knew that was somewhere I wanted to be. Like, Tim (Peters) said, the type of person Tom is -- when you get to know him it's absolutely incredible the ethical manner that he runs his race team and conducts his life in general. You can ask him the toughest question in the world and you can bet your bottom dollar he's telling you the truth with his answer. He's not going to sugarcoat it, he's going to tell you the truth and it takes a lot in this sport today to be that way. And, Timmy's right, he's got such compassion for his employees and his commitment to his team is absolutely incredible.

""To say that we've been underfunded all year is an understatement and Tom has stepped up to make sure that our teams have everything they need every single week to go out and be competitive and win races. That kind of commitment you just don't find in this day and age. I know his wife Myra is standing right there egging him on to make sure he's doing all of those things because she loves the sport and she loves her team just as much as Tom does. As an outsider coming into this for the first year, it's an incredible feeling to know that you have that kind of commitment out of a couple of owners that really just have been acquaintances for the last few years and now they've become very good friends in a short period of time."

What would it mean to the Truck Series if road course races are put back on the schedule next year?

"The one thing that I think road racing for the Truck Series is good is the Truck Series is definitely a feeder division. It's a place where a young kid can come, can figure out how to drive these things. We run a lot of mile-and-a-halves, so he can figure out the mile-and-a-halves, where most of them have run short tracks all of their life. So, it's a great place to learn. And, it's a great feeder series for Nationwide and hopefully eventually the Cup Series. If we're not running road courses it makes the car owner in Nationwide or the Cup Series maybe think twice because the driver he's looking at in the Trucks hasn't run road courses -- doesn't have that experience on that. So, for these guys to go and get that experience, understand it and get a better feel for it, it maybe makes those owners look a little differently at the Truck racers and how good a job that they can do for them in either Nationwide or Cup. So, I think it's a great place to get some experience for these young kids and figure out if they can do it to move up to the next series."

New carburetor gets Buescher to victory lane at Chicagoland