In his first NASCAR Camping World Truck Series start since 2001, Kurt Busch dominated the VFW 200 - leading three times for a race-high 57 laps - but was forced to settle for a ninth-place finish after the race's final outcome was decided by fuel strategy. 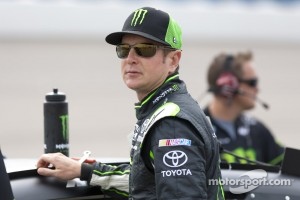 The Las Vegas native had his brother's Kyle Busch Motorsports (KBM) team positioned at the front of the field before coming down pit road for the final time on lap 79, but with several teams on different pit sequences, the Shore Lodge Tundra returned to the track scored just outside the top 20. Busch was able to salvage a top-10 finish in the closing laps, as several competitors made their way down pit road to top off with fuel, and others - who made it off pit road ahead of the No. 18 Toyota - were unable to hold off the hard-charging veteran.

"Today was a little fuel mileage game -- I thought we did good on our strategy, but maybe we just topped off with too much fuel at the end and were too conservative," said Busch, who was making his first start for his brother's Truck Series program after making nine starts for KBM's Nationwide Series team this year. "It was fun to get back in the trucks. I really enjoyed myself out there and wanted to do a good job for Kyle (Busch, team owner) and I think we got that done as far as evaluating our program -- his program. I say, 'Ours,' because we're brothers and it's fun to do this together. Thanks to Shore Lodge, Dollar General, Toyota, Flexco and Advanced Payment Services -- it takes a lot of sponsors in this day and age to make a program work."

After using three practice sessions to get reacquainted with the feel of a truck, Busch posted the fourth fastest lap in Saturday morning's qualifying session. Once the race started, it took little time for the 34-year-old driver to make his move, maneuvering into the second spot by the time that the field crossed the start-finish line for the first time. Upon making it to the runner-up spot, he settled in behind race leader Nelson Piquet Jr. until the first caution of the race occurred on lap 13.

Busch brought his Shore Lodge Tundra down pit road for a fuel-only stop and returned to the track scored in the fourth position. The former Sprint Cup Series champion once again outmuscled the Truck Series regulars on the lap-16 restart, capturing the lead for the first time before the field crossed the stripe. With Piquet Jr. as his wing man, the two had stretched the lead on the third-place truck to over three seconds when a debris caution slowed the field for the second time on lap 39.

The KBM over-the-wall crew administered a four-tire and fuel stop and returned their driver to the track. With two teams electing to take just two tires, Busch took the lap-42 restart from the third spot.

By lap 44, the Shore Lodge Tundra had reassumed the lead, which it would maintain during a spree of cautions near the halfway mark of the 100-lap race. On lap 45, John Wes Townley and Todd Bodine made contact and spun, bringing out the third caution of the race. Shortly after the field went back to green-flag conditions, Bodine lost a wheel and brought out the fourth caution.

On the ensuing restart, Piquet Jr.'s truck got loose under Busch - as he was making a bid for the lead - and spun off the exit of Turn 2. The spin initiated what turned out to be the final caution of the race and changed the complexion of the finish. When he spun, Piquet Jr.'s truck slid into the driver's side of the No. 18 Toyota, so second-place runner Johnny Sauter was asked to pull alongside and check for damage. Sauter reported that there was no visible damage, confirming what crew chief Phillips had concluded from atop the pit box.

Busch was able to maintain the lead on the lap-60 restart, and had paced the field for 34 consecutive laps when he came down pit road for the final time on lap 79. Phillips ordered up a right-side only stop, with one can of Sunoco fuel going into the Shore Lodge Tundra.

The race ended up proceeding caution free for the final 41 laps, relegating Busch to a ninth-place finish, despite proving to be the strongest truck in the field. The top-10 finish was the Las Vegas native's 18th in 26 career starts in NASCAR's third division.

Piqeut Jr., who pitted for the final time after his lap-57 spin, picked up his first career NASCAR Camping World Truck Series victory and second this season in NASCAR's top three divisions. Jason White finished over eight seconds behind Piquet Jr. in the runner-up spot. Dakoda Armstrong and Parker Kligerman finished third and fourth, respectively, while James Buescher rounded out the top-five finishers.

There were five caution periods for 17 laps. Ten drivers failed to finish the race.

The No. 18 Tundra, which posted its sixth consecutive top-10 finish, remained 11th in the Truck Series Owner's point standings. After 12 of 22 races, KBM's flagship Tundra sits 10 points behind the No. 9 Joe Denette Motorsports truck, which resides in the 10th position, and 73 points behind the series-leading No. 17 Toyota team.

Brian Scott will make his second Truck Series start for KBM this season, piloting the No. 18 Dollar General Tundra in the UNOH 200 at Bristol (Tenn.) Motor Speedway on Aug. 22.