Cale Gale and the No. 33 Rheem team finished seventh in the Lucas Oil 150 on Friday night at Phoenix International Raceway. Gale spent the first half of the race inside the top five, but after a mid-race spin was forced to battle back through the field for his seventh top-10 finish of the 2012 NASCAR Camping World Truck Series (NCWTS) season. 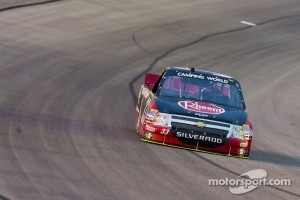 Being faced with a short 150-mile race on a newly reconfigured one-mile track, Gale and the Rheem team knew that qualifying would play an important role. After practicing inside the top-15 in both sessions, Gale recorded a 26.888-second lap during qualifying to secure the fourth starting position for the 150-lap race on Friday evening.

Early in the event, Gale listened to the coaching of veteran spotter Rick Carelli and crew chief Jerry Baxter on improving his line around the one-mile speedway. By backing up his corner, Gale returned to the throttle sooner and avoided overworking his brakes to gain valuable seconds on the track. Sitting in the fifth position, Gale reported a tight truck early in the race, but noted that the handling continued to improve as the track loosened up. The Rheem team utilized a caution on lap 37 to put four fresh tires on their truck and fill the fuel tank. Gale left pit road in ninth-place, but continued to pick up positions as a series of restarts continually kept the field close.

Within just 30 laps, Gale had raced all the way up to fifth. Battling hard for position on lap 73, Gale was in the low groove in turn four when he got pinched and made contact with the other truck. The No. 33 Rheem Chevrolet was sent spinning across the track before ultimately making contact with the outside wall. Suffering damage to the left rear, Gale drove the Rheem Chevrolet down pit road and the Eddie Sharp Racing (ESR) crew quickly went to work fixing their Silverado.

Following the incident, Gale slid back to the 18th position. With a fast truck, Gale was able to battle a tight handling Chevrolet to get back up to 15th. A timely caution on lap 104 allowed Gale to revisit pit road for a track bar adjustment, which helped restore additional speed in the bruised truck. Over the next 10 laps, Gale returned to the top 10 where he would stay for the remainder of the evening. By the time the checkered flag waved, Gale was scored in the seventh position.

"The Rheem team built me a great Chevrolet for tonight's race," commented Gale. "Up until this weekend, I had never raced at Phoenix International Raceway. It's a really fun track and my team built me one of the best trucks that we've had all season. We were definitely a top-five truck, and with how everything was playing out I think we had a shot at the win. We got a little bit behind when we spun near the halfway point, but I'm really proud of how hard my team worked to get our truck repaired and back in contention. These guys have done such a great job all season; I can't wait to get to Homestead-Miami Speedway with them next weekend."