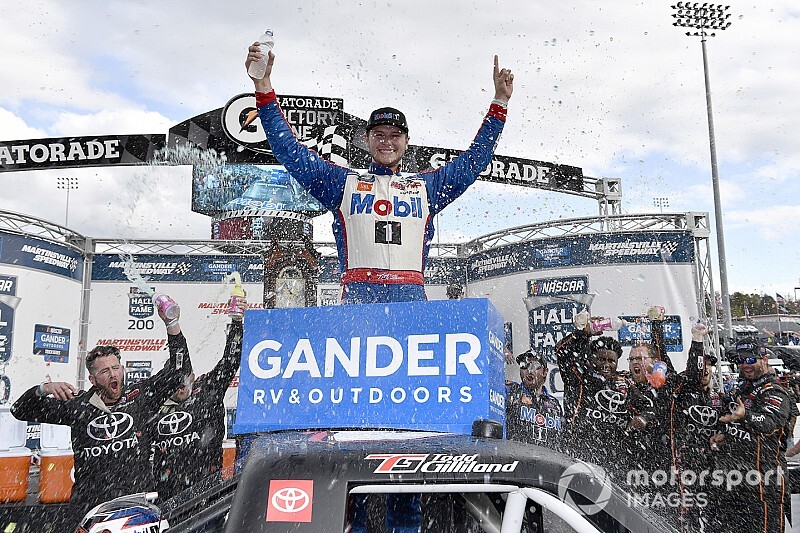 Gilliland got around Ross Chastain on a restart with 10 to go in regulation and then held him off in a two-lap overtime to win Saturday’s NASCAR Hall of Fame 200 at Martinsville (Va.) Speedway.

The win is Gilliland’s first in 46 career starts. Entering the race, he held the record as the driver at Kyle Busch Motorsports with the most starts without a victory.

“I’m just so proud of these guys on this team. This is a long time coming. Hopefully, this will get the momentum rolling and open up some doors for next year.”

Gilliland will not be returning to KBM next season.

Chastain thought he had a win in hand late in the race, which would have advanced him to the championship race at Homestead, but battling KBM teammates Gilliland and Harrison Burton down the stretch turned out to be too much.

“If I can go head-to-head with that team, I can fight them one at a time, but I can’t take two of them,” he said. “They took turns beating my back bumper off, which is fine. I’m good with it.”

While several Truck playoff contenders had trouble in the race, the standings heading to the final race of the semifinal round at Phoenix remain basically the same.

A big wreck erupted on Lap 124 of the scheduled 200 that started when Sam Mayer got into Ben Rhodes off Turn 4 which collected several playoff contenders.

Serious damage was done to the playoff trucks of Moffitt, Ankrum and Austin Hill, all of whom had their race end early.

A red flag was displayed in order to clear the track of debris. When the race returned to green on Lap 131, Chastain remained in the lead followed by Sheldon Creed, Christian Eckes and Harrison Burton.

Ray Ciccarelli spun on Lap 142 in Turn 2 to bring out another caution. On the restart on Lap 146, Chastain remained out front followed by Eckes and Creed.

Sauter got into the back of Friesen on Lap 149 sending him around off Turn 4 and placing the race back under caution. On the restart on Lap 157, Chastain remained out front.

Eckes got around Chastain briefly for the lead on Lap 159 only to see Chastain return to the front the next lap.

The race returned to caution on Lap 163 after a four-truck wreck entering Turn 1. On the restart on Lap 169, Chastain led followed by Burton, Gilliland and Sauter.

Caution for debris on the track was displayed on Lap 181 after an axle and fluid was dropped by the truck of Jennifer Jo Cobb. On the restart on Lap 191, Chastain remained the leader followed by Burton and Gilliland.

Gilliland got around Chastain on the restart to take the lead for the first time in the race.

A three-truck wreck collecting Gus Dean, Jordan Anderson and Natalie Decker placed the race back under caution on Lap 196 and sent the race into overtime.

Gilliland restarted in the lead followed by Chastain, Burton and Sauter.

Mayer held off Enfinger in a five-lap dash to the finish to claim the Stage 2 win.

Hill was third, Chastain fourth and Eckes completed the top-five.

Following the break between Stages 1 and 2, some of the lead-lap trucks elected to pit but Moffitt remained on the track and in the lead on the restart on Lap 62.

Crafton got alongside of Eckes after the restart and the two banged fenders before Eckes cleared with the second spot.

With 30 laps remaining in the second stage, Friesen and Gilliland made contact racing for position with Friesen coming away with the seventh spot.

By Lap 75, Moffitt had moved back out to a 3-second lead over Eckes as Rhodes remained in third.

On Lap 79, Tanner Gray spun off Turn 2 to bring out a caution. Many of the lead-lap trucks elected to pit under the caution and Crafton’s No. 88 Ford came to a stop on the frontstretch after losing power.

Enfinger did not pit and led the way when the race returned to green on Lap 88. He was followed by Mayer, Hill and Chastain. Crafton was still on pit road when the race got back underway.

Mayer grabbed the lead after restart following contact with Enfinger.

On Lap 90, John Hunter Nemechek wrecked on the backstretch after contact with Rhodes to bring out another caution. Crafton finally got back on the track but was running 8 laps down.

On the restart on Lap 96, Mayer was followed by Enfinger and Hill.

Moffitt took early command of the race, leading 49 of 50 laps on his way to the Stage 1 victory.

Eckes, who started on the pole, led the first lap but Moffitt got around him on the outside to take the top spot on Lap 2.

On Lap 17, Ciccarelli spun off Turn 4 to bring out the first caution. On the restart on Lap 23, Moffitt led the way followed by Eckes and Crafton.

With 20 laps remaining in the first stage, Moffitt had moved out to more than a 1-second lead over Eckes with Rhodes running third. Sauter was fourth and Burton fifth.

After 40 laps, Moffitt’s lead had ballooned to 2.3 seconds over Eckes while Rhodes remained in third.

Anderson had to start the race from the rear of the field after missing the driver’s meeting.

Austin Hill will return to Truck Series in 2020 with Hattori