"Talladega, it's all about being in the right place at the right time"

Justin Lofton and the No. 6 Lofton Cattle/J6Ink team started the fred's 250 Powered by Coca-Cola from the 16th position and after persevering through multiple on-track incidents, was collected in the final lap's "big one" and scored with a 20th-place result. 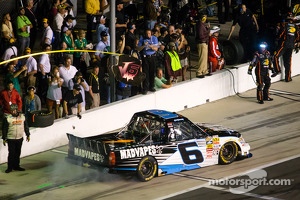 Following the green flag, Lofton demonstrated that the pink adorned Lofton Cattle/J6Ink machine, painted in honor of Breast Cancer Awareness Month, was balanced and fast as he advanced in the running order. On lap 53, crew chief Bryan Berry called him to pit road under green-flag conditions for two fresh tires and a full tank of Sunoco fuel. A lap-55 accident occurred while the No. 6 team was a lap down to the leader; however, as the recipient of the Lucky Dog award, Lofton was returned to the lead lap. As the 94-lap event neared its completion, the excitement on the 2.66-mile track began to heat up. After narrowly avoiding an incident on lap 66, the Westmorland, Calif., native drove to pit road so the team could check if the truck was damaged. The unscheduled pit stop placed the black, white and pink truck towards the back of the field and as Lofton was working his way to the front again, he received significant left-front damage during the next multi-truck accident on lap 80. The Berry-led crew made fast repairs on pit road and following the next caution on lap 88, the team received the Lucky Dog award again. Returned to the lead lap and in the 20th position, Lofton was ready to battle his way forward during the three-lap shootout to the checkered flag. On the final trip down the frontstretch of the Alabama-based facility, chaos ensued and resulted in many heavily damaged trucks, including the Lofton Cattle/J6Ink Chevrolet. NASCAR's unofficial results list Lofton in the 20th position at the race's conclusion.

Justin Lofton Quote: "That was a pretty crazy situation, and I'm just glad that no one was seriously injured. When you look at the damaged trucks, it's pretty impressive that everyone was able to walk away from that. Thank you also to the No. 6 Lofton Cattle/J6Ink Chevrolet team for all of their hard work. They worked hard all day and never gave up, putting us in position to get a solid finish going into that last lap."

Max Gresham and the No. Made in USA Brand (MIUSA) Chevrolet team capped off a great weekend at Talladega Superspeedway with his career-best superspeedway finish of eighth in the NASCAR Camping World Truck Series. 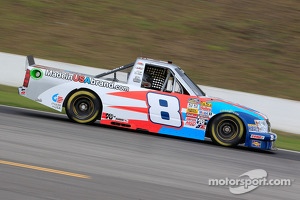 Not only did the Sharp-Gallaher Racing driver get past a tumbling truck in the "Big One" on the final lap of the fred's 250 Powered by Coca-Cola, he also accomplished his best Camping World Truck Series qualifying position to date. The 20-year-old made his 34th career NASCAR Camping World Truck Series start from the second position at the superspeedway. Gresham was the 29th competitor to attempt the restrictor-plate track and posted a lap of 54.403 seconds. The Milner, Ga., native's previous best qualifying effort was at Michigan International Speedway, where he qualified fourth earlier this season. Following the green flag, he was shuffled to the back as often as he worked his way to the front. He was as high as second place on the fourth lap, and 11 laps later he was down to 17th. Gresham narrowly escaped a six-truck accident on the 67th of 94 laps. His No. 8 Sharp-Gallaher Racing truck was damaged by another competitor during the ensuing pit stop. He was forced to make two more stops so the team could make the repairs. By lap 78, Gresham was up to seventh place when he was forced off the track and onto the apron by another driver, which dropped him back to 24th place. Gresham mounted one more rally, getting up to 14th on the final lap. As the lead pack came through the tri-oval, two trucks made contact with each other and a chain reaction ensued that collected much of the field. The massive 12-truck crash coming to the checkered flag created one of the wildest finishes of the 2013 NASCAR Camping World Truck Series season. But, for Gresham and Sharp-Gallaher Racing, it was a rare opportunity to dodge disaster for the top-ten finish.

Max Gresham Quote: "I don't know what's a more-welcomed surprise - missing that wreck or finishing eighth. What a wild day. It was time to get going and we got ourselves in a good line of traffic. We were moving up to put ourselves in a great spot for the finish when we got forced off the track. The No. 32 truck (Miguel Paludo) flipped right in front of me. I can't believe we missed it. It proves again that at Talladega, it's all about being in the right place at the right time"

Chastain and Blaney finishes 3rd and 21st at Talladega

Denny Hamlin shooting for a three-peat