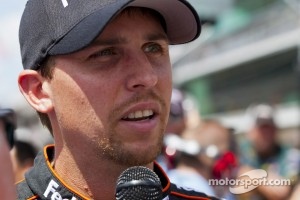 After starting from the 16th spot in Saturday's Pocono Mountains 125 NASCAR Camping World Truck Series race at Pocono (Pa.) Raceway, Denny Hamlin quickly worked his way into the top 10 and remained there until he brought the GNC Franchising Tundra down pit road for his first scheduled pit stop on lap 19. After pit stops cycled through, Hamlin made his way into the top five, and despite substantial damage to the right front fender of his No. 18 Toyota, was able to hold on for a fifth-place finish in his first Truck Series start of the 2012 season.

"It just definitely wasn't the day we were looking for," said Hamlin, who has four NASCAR Sprint Cup Series victories at the 'Tricky Triangle.' "Just never could overcome it. The power of those guys in front of us was big and we just didn't have a great handling truck, so with all that combined it's tough to get the track position you need. I have to thank everyone from all of the GNC Franchises for coming on board the truck this week, Toyota for their supporting it, NDS Nutrition, M&M's, Dollar General, Flexco -- they're all big supporters of Kyle Busch Motorsports and thank Kyle (Busch) for putting me in it."

Once the green flag flew, Hamlin got a healthy start and was able to propel from his 16th starting position to the ninth spot by the time the field made it back to the start-finish line, for the completion of lap 1. The Virginia native settled into ninth place until crew chief Eric Phillips played out his pre-race strategy - managing the race similar to a road course - and ordered his driver down pit road on lap 19, before the rest of the field made their regularly-scheduled stops.

Phillips strategy paid off, as the GNC Franchising Tundra was scored in the sixth spot when pit stops cycled through on lap 28. Hamlin remained sixth when the second caution of the race slowed the field on lap 34

On the ensuing restart, the Sprint Cup Series stalwart once again managed to gain positions on the first green-flag lap, moving up to the fourth position by the time the field crossed the stripe. The third and final caution of the race occurred on lap 40, when Timothy Peters and Miguel Paludo got together in Turn 2. As Hamlin attempted to maneuver his way through the two trucks, who were colliding in front of him, his No. 18 Toyota made contact with Paludo's No. 32 truck, causing significant damage to the right front fender.

Hamlin was scored in the fifth position when the race went green for the final time, with seven laps remaining in the 50-lap event. He was able to make his way past pole-sitter Nelson Piquet Jr. off the restart, but a tire rub - which developed as a result of the right front fender damage - intensified as the race continued into the final stages, and the 31-year old relinquished the position one lap later. The No. 18 GNC Franchising Tundra took the checkered flag from the fifth position.

There were three caution periods for 12 laps. Thirteen drivers failed to finish the race.

Despite collecting its second top-five finish of the season, the No. 18 Toyota remained 11th in the Truck Series Owner's point standings. After 11 of 22 races, KBM's flagship Tundra sits six points behind the No. 30 Turner Motorsports Chevrolet, which resides in the 10th position.

Jason Leffler will be back behind the wheel of the No. 18 Shore Lodge Tundra when the NASCAR Camping World Truck Series travels to Michigan International Speedway in Brooklyn on Aug. 18.

Rick Hendrick's 'amazing empire' may just be getting started