© 2021 Motorsport Network. All rights reserved.
TV Tickets Fashion Giorgio Piola Jobs
Previous / Hackenbracht recovers from a late race spin to finish 17th in Sin City Next / It's not where you start, it's where you finish Kyle
NASCAR Truck Race report

"I am very proud of NTS Motorsports, and we are now even more hungry for a win at Talladega."

Looking to have luck on his side, Ron Hornaday and the No. 9 NTS Motorsports team entered the race weekend at Las Vegas Motor Speedway looking for their first win of the 2013 season. 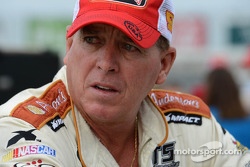 Qualifying in the eighth position, Hornaday quickly moved into the top five and by lap eight moved into the second position. Under the first caution of the race on lap 13, crew chief Bruce Cook called Hornaday to pit road for a fuel only stop. As teams began to utilize various pit strategies, Hornaday slipped to sixth on the restart.

With hard racing among the top competitors, Hornaday remained in the sixth position when the second caution flag waved on lap 28. Opting to stay out under the caution, the race restarted on lap 32 with the No. 9 Silverado in sixth.

Moving in to the top five, Hornaday made his second stop of the race under the lap 46 caution taking on four fresh tires and fuel. The race restarted with Hornaday in the ninth position and by lap 57, he was scored sixth. Several laps later, while battling his teammate for position, Hornaday made contact with the No. 24 Silverado causing both teams to sustain damage. Hornaday pitted for four tires, fuel and to repair damage to the right-front fender of his No.9 Silverado. The race restarted on lap 64 with Hornaday in the 22nd position.

Ten laps later, the caution was again displayed on lap 74. Making the decision to stay on track to gain track position, Hornaday restarted the race on lap 78 in fourth place and took over second on lap 79.

Settling in to the second position, Hornaday pitted for the final time under the lap 91 caution for four tires and fuel. With varying strategies in place, Hornaday restarted the race on lap 96 in the 13th spot, but the race was quickly slowed for a caution on the restart. The race returned to green-flag conditions on lap 102.

Hornaday moved back in to the top five following the restart and returned to the second position on lap 113. Running lap times faster than the leader, Hornaday was able to take over the lead on lap 120.

The final caution of the race waved on lap 138 and when the race restarted, it was a three lap shoot out to the checkered flag. Hornaday led the field back to green, but after spinning his tires on the restart, slipped to fifth and fell to sixth when he was passed crossing the finish line.

Hornaday led a total of 23 laps and his sixth-place finish marked his eighth top-10 finish of the 2013 season with five races remaining on the schedule.

Hornaday Hype: "Our NTS Motorsports No. 9 team came so close to our first win of 2013 at Las Vegas Motor Speedway. Bruce Cook called a great race and really put us in position to win. The NTS truck was incredibly fast all day and I proved that by coming through the field multiple times. The sixth-place finish is not what I wanted, but it does help us in the points race. The last caution is not what we needed and I wasn't able to capitalize on the final restart. I am very proud of NTS Motorsports, and we are now even more hungry for a win at Talladega." 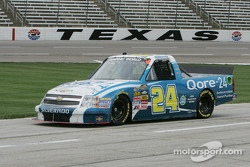 Returning to the No. 24 Qore-24 Chevrolet at Las Vegas Motor Speedway after missing the NASCAR Camping World Truck Series (NCWTS) event at Chicagoland Speedway, Brennan Newberry started with top-five finishes in both practice session on Saturday before qualifying in the 13th position for the Smith's 350.

Immediately after the 146-lap event started, Newberry moved in to the top 10 and reported to crew chief Eddie Pardue he was struggling with the handling of his Chevrolet.

The first caution waved on lap 13 and provided the No. 24 team with their first opportunity to adjust on the Qore-24 Silverado. Newberry pitted from the 12th position for fuel and a trackbar adjustment. Loosing no positions on pit road, the race restarted in lap 13 with Newberry in 13th.

Running good lap times and with encouragement from his spotter, Newberry remained in the top 15 before encountering his first obstacle of the race on lap 28. Battling a loose-handling Silverado, Newberry found himself in a spin off turn four, but sustained no damage. Pardue called Newberry to pit road for four tires, fuel and a round of adjustments to help with the handling. The team made a second stop to top off with fuel and assess any possible damage to the No. 24 Silverado. The team restarted the race on lap 32 in the 21st position and quickly found himself in the middle of three-wide racing.

Continuing to work with a loose-handling truck, Newberry was able to pit again under the lap 46 caution for fuel and another round of adjustments. Several laps after returning to green-flag racing, Newberry found himself in a tight battle with his teammate while racing for position on lap 60. Unfortunately, the No. 9 and No. 24 trucks got together on the next lap, and each sustained minor damage, but were able to continue on competitively. Newberry pitted for tires, fuel and to assess the damage to his No. 24 Qore-24 Silverado. The race restarted on lap 64 with Newberry 24th, a lap down to the leaders.

Fortunately for the team, the caution waved again on lap 74 allowing Newberry to receive the 'Lucky Dog' award and return to the lead lap. Newberry pitted for fuel, adjustments and four tires. The race restarted on lap 78 with the team in the 24th spot.

Racing hard for position, Newberry returned to the top 20 before the caution waved again on lap 91. Newberry pitted for fuel only, but received a speeding penalty on pit road. Pardue opted to bring Newberry back down pit road and top off with fuel. When the race restarted, Newberry was at the tail end of the field and on the restart, received damage from the 81 truck resulting in a flat tire. The team made two stops under the caution for tires, fuel and assess for damage to the No. 24 Silverado.

With 40 laps remaining in the race, Newberry was scored in the 23rd position on lap 106 while running his fastest laps of the race. Staying out under a late caution, Newberry was able to gain track position and finished the Smith's 350 in the 15th position.

Brennan Newberry Post Race Thoughts: "I cannot say enough about how great my NTS Motorsports team is. The Qore-24 Chevrolet was the fastest it's been all season, and we truly showed our speed in both practice sessions. We had a great race truck and knew we would qualify around where we did - which was fine. The race was a tough battle that is typical of great NASCAR Camping World Truck Series racing, and my night was not an exception. Our top-15 finish is a testament to NTS Motorsports' resilience. I am excited to go back to a Super Speedway and battle for my best finish yet."

It's not where you start, it's where you finish Kyle

NASCAR's 2018 Hall of Fame Class to be inducted Friday night

A "humbled" Ron Hornaday will join NASCAR Hall of Fame