Matt Crafton, No. 88 Menards Toyota Tundra, Thorsport Racing
What is your outlook for this season?
“Looking forward to 2014 without a doubt. Our Toyota Tundra is ready to go for Daytona. Just do what we did last year and do what we’ve done each and every year. Hopefully we have all of the luck on our side that we had last year. We were good last year, but we were lucky a lot of times and I was always told by one of the great race car drivers -- Davey Allison always told me, ‘I’d rather be lucky than good,’ and there was plenty of races that we had the luck on our side as well. Really looking forward to this year. It’s never been done -- a repeat -- so I don’t want to talk about it too much. This is going to be the last time I say it, so hopefully we can do it.” 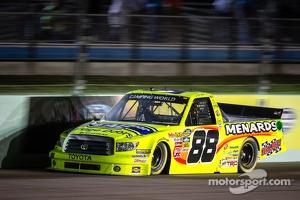 What did you do during the off-season?
“I was out in California a lot. I just played out in the desert and got a new buggy built and it has a new Toyota Tundra Triad motor in it and been playing and having a lot of fun relaxing. Rolling on the floor with a baby and it’s been the best off-season so far.”

Was your goal to be consistent and finish in the top-10 each race last season?
“It’s something that played out that way. That’s just the way, I guess, my driving style has always been. Yeah, I might not win the most races of the drivers in the series, but I’ve always been the guy that’s been consistent and try not to put yourself in bad positions. I always say if you just don’t make mistakes you’ll win the war and not just each battle. That’s the thing each and every week we always tried to do.”

Is it odd that your biggest race of the season is at the beginning of the season?
“Oh, without a doubt. It’s all I’ve ever known since I’ve ran the Truck Series is the biggest one is first. I guess the Super Bowl and World Series is at the end of the season, but I really don’t pay that much attention to it. I just pay attention to racing.”

Are you looking forward to the new race trucks?
“I look forward to it. That 2014 Tundra has been very good at the test. They’re a lot different than the 2013 Tundra being on the race track. We haven’t been on any mile and a half’s with it, but at the superspeedways I think it’s going to be very, very good. I love the way it looks. It’s an awesome looking truck. I’m looking forward to getting my new 2014 Tundra on the road as well.”

Do you like the look of the new Tundra race truck?
“I love the new look. The new Tundra is a very, very cool looking truck. It’s so realistic to your trucks that you see out on the street. It’s awesome.”

Do you think the performance on the race track is going to change a lot with the new trucks?
“I don’t think it’s going to change a ton, but I think it’s going to be better drafting to be totally honest. From when we were here testing the truck sucked up and drafted so much different than the old truck and there’s definitely a difference, but it’s not like, ‘Oh my god, huge difference.’ But, it definitely sucked up to the packs a lot different.” 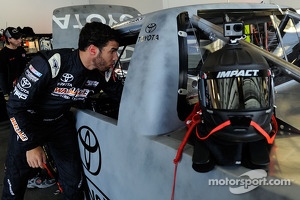 “Definitely have to get more than one win here and have to perform better and finish races. The first part of the season last year we didn’t do too good of a job at doing that -- at finishing races. We had the speed right out of the gate -- finished fifth at Martinsville and then we go to Charlotte and that was our big one where we wrecked out right there at the end and then go to Kentucky and wrecked out early. We revamped the whole program that I had going on there and the next thing you know the finishes started picking up again. Now I know what to do on my part and we’re building brand new Toyota Tundras back at the shop. I’m excited to be here and excited to get the season underway. I think we have a really good shot at being very successful and competing for the championship title.”

Did Kyle Busch add pressure when you weren’t finishing as well last season?
“I remember one key thing he (Kyle Busch, team owner) said to me and it was at Kentucky too when we were first and second in practice, he comes up and he’s like, ‘Man, you’re fast, but finish the race.’ I’m like, ‘Okay.’ I qualified second and wrecked on lap 80. That stood out the most. It sucks being one of his drivers as far as seeing how good he is and especially when he rolls by and you’re on the hook and here he comes under caution rolling by you. You know he’s looking and you don’t know what he’s thinking. I hate it -- having a wrecked up race truck around him because I’m much better than that and I wanted to show him that I had it in me to finish races and compete with him along with the other guys that were finishing up there with him. There were plenty of times that we were faster than him -- Charlotte and Kentucky were two races he won and a lot of times people say that if you’re beating Kyle then you’re winning the race. Now, I know we can beat him and I know we can finish the race.”

What type of tracks do you expect the new 2014 Tundra to make a big difference?
“I think we’re going to see a difference at Kansas when we go there -- here (Daytona) as long as we have a good setup and we can draft well then I think we’ll be okay -- and miss the big one. Martinsville, it’s going to be more based on setup and getting off the corners, prime example of the second Martinsville race. I think when we go to Kansas and Charlotte and see how the aero affects us there. We couldn’t really -- I couldn’t really pass that well in the air and at first I really didn’t know what I was doing of course, but now that I have more of a feel for it I still wasn’t that great behind traffic. I’m hoping that this new truck will kind of equal the playing field out. I just hope this kind of brings everybody equal and not really gives everybody more of a shot at getting the pole, but kind of closes that gap.”

Did your win at Martinsville open more opportunities?
“I’d say so. It’s definitely getting me more recognized and noticed from all over. I did a lot of media outlets that really got my name out there and that could really push that win out there and push the diverse side of it out there. It can get over played at times, but at the same time you have to look that there’s no one there and we have to play that role.”

Will you be a championship contender in the NCWTS this season?
“For sure. After what we learned last year, I think we’re really going to be a force to reckon with. Having Kyle (Busch, team owner) more involved and talking with him more has really helped me and I think it’s really getting our program back up to the top. He’s really wanting to get ahead of this new body program and I’m all for that. He’s the best in the business when it comes to Truck racing and Nationwide racing and can get there in Cup. Taking after him is something I’m proud of and I’ll take it. I think we’ll have a really solid season.”

Kyle Busch ready for action in the No. 51 ToyotaCare Tundra