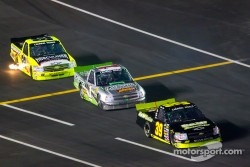 Jeffrey Earnhardt and Darlington Raceway got acquainted very fast this past weekend for the running of the Too Tough to Tame 200 on Saturday night.

Earnhardt wheeling the #1 Fuel Doctor Chevy struggled with the oldest track on the NASCAR circuit and was forced to a back up truck early after encountering the wall.

Earnhardt started 35th for the event as a provisional and ran the race like a veteran. With guidance from his spotter and crew chief to “Race the track and keep rolling through the center”, Jeffrey continued to increase his lap times as he climbed up to the 26th position on lap 40 after dodging spinning trucks for the first few cautions.

By lap 53, Earnhardt was beginning to run down competitors within his view and worked his way to the 24th position before another caution flew.

During the pit stop the Fuel Doctor crew added a spring rubber to the left rear and sent the rookie back out to battle.

The adjustment worked as he turned his fastest time on lap 66. Continuing to listen to his coaches, Jeffrey found a rhythm and was looking at cracking the Top 20 by lap 90.

With just 50 laps remaining, Earnhardt moved into the 19th position and steadily climbed further up the charts with his Fuel Doctor Chevy. A restart on lap 95 put the entire day in jeopardy when the #4 of Carmichael and #20 of Long got together just in front of Earnhardt and with a great move to the inside Jeffrey drove cleanly away and into the 15th position.

Earnhardt continued to move around the tricky Darlington track and turned his fastest lap with just 20 to go before the #22 of Coulter drove into the path of the Fuel Doctor Chevy entry and Earnhardt into the turn two wall.

The crew went to work to pull the fenders away from the tires and sent Earnhardt back to the track in the 20th position, on the lead lap.

As the checkered flag waved, Earnhardt finished 20th and held onto the 10th position in the point standings.

Earnhardt and the Fuel Doctor Racing team will now focus on the next task, Martinsville for the running of the Kroger 250 on Saturday April 2nd.

Another Top-10 at Texas is "huge accomplishment" for Ryan Sieg