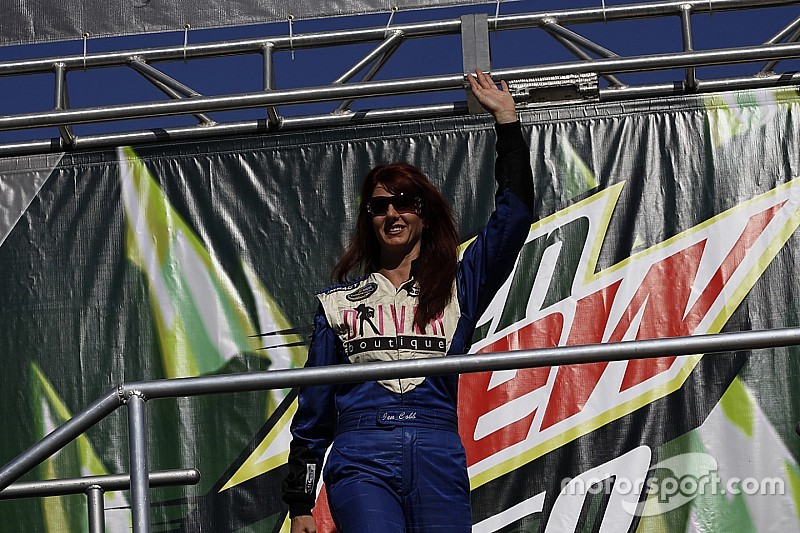 While the NASCAR Camping World Truck Series is taking next weekend off, Jennifer Jo Cobb will be busy competing in the NASCAR Whelen Euro Series at Valencia.

Cobb will be the latest NASCAR national series driver to compete in the NWES in a deal that came together last November. She’ll join other NASCAR Series drivers such as Bobby Labonte, Jeffrey Earnhardt, Max Papis and Brandon Gdovic who’ve competed in the European series.

“I was racing in the NASCAR Camping World Truck Series in Homestead-Miami and my truck was having engine problems,” said Cobb. “When I climbed out of the truck in the garage area Regina and Hubertus (Heyman) were standing nearby.  We started talking and they told me they were team owners in the NASCAR Whelen Euro Series.

“I expressed interest in racing in the series and told them that if there were ever an opportunity, I would love to race with them.  Over the following months we kept in touch and Hubert and Regina attended our races in Daytona and Atlanta and we were able to speak more about making this happen.  They are really the ones who went to work to make this a reality and I am very grateful for them.”

Cobb will be competing for Racing Total which fields cars out of Germany and this will be the first time Cobb has raced outside of North America.

“I am very excited and nervous because I want to do well for my team,” said Cobb. “My road course racing experience is limited to just two tracks - Elkhart Lake’s Road America and the Canadian Tire Motorsports Park in Canada.

“Racing in Canada, outside of the U.S. is really fun because the fans are not only very nice but they are enthusiastic about NASCAR and when the fans are energized and appreciative it makes the experience that much more enjoyable.  I hope this is a great experience in Valencia next week.”

Cobbs is also excited to participate in one of the fastest growing series sanctioned by NASCAR.

I’ve always wanted to be part of NASCAR on an international level and the fact that the Euro series exists is amazing. I'm glad that NASCAR is expanding to so many other countries outside of the U.S. and I hope that we see more drivers from around the world in our series in the U.S. and that more of our drivers get these great opportunities.

“I see a great opportunity for growth for our fans in the U.S. to want to come to Europe to see this series.  I know that Hubert and Regina host many Europeans to come to the U.S. NASCAR races so we are looking into programs where fans from the U.S. can travel abroad to enjoy action packed racing in Europe.”

Cobb has made a total of six starts on road courses in North America competing in five NCWTS races at Canadian Tire Motorsport Park and also one Xfinity Series start at Elkhart Lake. While she has some experience on road courses, she understands this is a new venture for her at Valencia.

“I’ve always been taught that to finish first, you first must finish so it is important to for me to respect the equipment and my competitors,” Cobb said. “I have spent time studying the course in Valencia - for my first race a top-10 finish would be a great goal.

“It is hard to know what to expect with so many unknown factors but I’d love to dream big and think about a podium finish.  No matter what happens, I hope to return to the NWES later in the year to improve upon whatever this race brings.”

Peters making the most of new NASCAR Truck opportunity