The 19-year-old Gresham moved into the Truck series in 2012 after winning the NASCAR K&N Pro Series East championship a year ago. His best finish behind the wheel of the No. 24 JDM Chevrolet Silverado this season was 18th at Rockingham Speedway in April. The team posted an average finishing position of 23.8 in their eight starts together and Gresham is currently 20th in the 2012 NCWTS championship driver point standings. Despite the fact that Gresham did bring some sponsorship to what was a two-truck team, six accidents in eight races slowed the youngster’s progress. 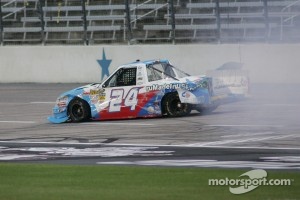 "I know everyone expected to do better than that," stated Gresham. "The guys at JDM are some of the hardest working I have ever been around and they did their best to give me great equipment week in and out. Joe (Denette) is a really, really nice guy an he's dedicated to the sport and his team and committed to making both as good as possible. Honestly, everybody did their best this year. Unfortunately, we just didn't have the results to show for it."

JDM will continue to campaign the No. 9 Chevrolet Silverado driven by Ron Hornaday, Jr. throughout the remainder of the 2012 NCWTS season.

"Obviously, we hate to see Max go,” said Joe Denette, Owner of Joe Denette Motorsports. “Max has been a great student of the sport with a wealth of natural talent and a friendly personality. Unfortunately, Joe Denette Motorsports was not the right fit for him. We wish Max the best of luck in the future and know without a doubt he will land on his feet.”

"I'd like to do some more Truck Series races this year, maybe some Nationwide too," Gresham stated. "The big thing will be to stay in the seat and stay as fresh as possible. I know we're going to run some Late Model races for now and continue to do that until we sort out what kind of NASCAR opportunities I have later this year and next season in 2013.

"I know I can do this," Gresham continued. "I won the NASCAR K&N Pro Series East championship last year and that didn't get handed to me. I think I have proven to people over the years that I can be competitive and win races. It's just a matter of being in the right situation."

NASCAR's 2018 Hall of Fame Class to be inducted Friday night

A "humbled" Ron Hornaday will join NASCAR Hall of Fame