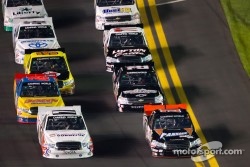 Darlington, SC - March 13, 2011 - Panhandle Motorsports Rookie driver and the youngest NASCAR Camping World Truck Series competitor, Johanna Long and her No. 20 Panhandle Grading & Paving Toyota Tundra finished 31st in last nights "Too Tough To Tame 200" at Darlington Raceway after an incident on lap 96 forced the team to load up early.

With an estimated crowd of 20,000 on hand at the 1.36 mile oval, 18-year-old Long took the green flag from the 35th starting spot. It didn't take long for things to heat up with the first caution flag falling on lap two. After the restart on lap four, Long made her way up to 24th spot.

"We worked so hard in practice, running more laps than any other team with our Toyota Tundra," said Long. "It was all about getting comfortable my first time out at Darlington, then gaining speed and getting my lines perfect. The guys all set up a great truck for me, so I was trying my best to start pulling up position at the start."

For the next 94 laps, the team worked with the Rookie driver, battling heavy sun in turn 4, a record number of cautions and cooling track conditions with two pit stops and wedge adjustments as the driver noted on lap 50 that she was "putting a lot of wheel into it and not getting much back. I'm trying, guys."

After falling a lap down at lap 61 and getting tagged with bumper damage in the fourth caution of the evening, Long powered back to get the Aaron's Lucky Dog award on lap 95 at the race's eighth caution. As she rounded the corner in turn 4, an accident involving the No. 4 truck of Ricky Carmichael ahead on the straightaway caused the field to back it down amidst major smoke and debris.

With nowhere to go as the No. 8 of Nelson Picquet, Jr hit the wall directly in front and rolled down in front, Long tried to avoid and had a left front tire go down. Long lost all steering with the damage and fought hard to brake and avoid Carmichael ahead, but the contact was unavoidable. After a hard hit, both drivers' trucks were taken off the track by the wrecking crew, and Long went to the Infield Care Center as a precaution.

"It was so great to get the Aaron's Lucky Dog and I was really going to fight on my next lead lap run to start taking position," said Long. "It's such a shame, we had an awesome Toyota Tundra and my crew is amazing. They are patient and dial me in every race, especially these first time races this year. We're a team, and we're going to keep digging here - and move on to Martinsville, my favorite short track and a track I've driven before. My sights are still set on Rookie of the Year and helping my family get sponsorship for this team. My guys and I have worked too hard, on limited resources, to be here to lose our drive."