The young driver qualified for the 100-lap event in the 23rd position and elected to stay in the back of the pack for the beginning of the race for the storm to settle at the front of the field. King was scored in the 34th position when the first caution flag was displayed on Lap 16 for an accident in turn four.

I'm a rookie, this is unreal. This Red Horse Racing team is unbelievable.

Crew chief Chad Kendrick brought King to pit road for four tires and fuel. The team visited pit road for a second-time to top off with fuel before the restart on Lap 23.

King cracked his way into the top-20 when the second caution flag was displayed on Lap 43 for debris. Sitting in the 19th-place, the team made a quick stop in for Sunoco racing fuel and returned to the track. King restarted Lap 46 in the 17th place looking for a guide in teammate Todd Bodine who lined up 19th.

The caution quickly waved for the third time on Lap 51 and the team elected to stay out as it was too soon to visit pit road. King was able to obtain two positions and restart Lap 54 in 15th. After picking up five additional spots, the fourth caution was displayed on Lap 63 for an accident on the frontstretch.

Kendrick brought the Red Horse Racing Tundra down pit road for a fuel only stop. Before the field resumed racing, King visited pit road to top off with fuel to make it to race end. On the Lap 68 restart, King was scored in the 23rd position.

King was scored inside the top-10 in eighth place when the caution flag was displayed on lap 85 for an accident in turn four. The team elected to stay on track to maintain position. The field restarted on lap 90 and when the sixth caution flag was waved just five laps later, King was able to pick up five additional positions, now putting him inside the top-five in the third-place.

The field took its first attempt at a green-white-checkered finish on Lap 99 but was quickly waved back under caution in lap 101 for an accident on the frontstretch. King maintained the third-place position and was looking for his way to the front. 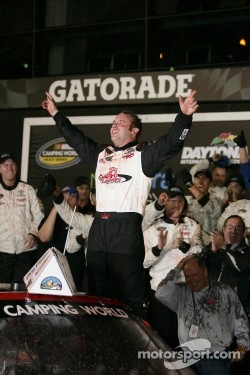 The second attempt at the green-white-checker was on Lap 103. With the white-flag in sight, contact was made on the frontstretch on lap 105 bringing out the red-flag conditions for the heavy debris. King was now sitting in the leader's position. After nearly 12 minutes of clean-up the field resumed to the track.

The third and final green-white-checkered finish is where King found himself in position to come across the 2.5-mile tri-oval in the first position. The green-flag waved for the final time on Lap 107 as King sailed smoothly for two more laps before collecting the race victory. This was King's first victory in eight Truck Series starts, including his first start at Daytona. King is also only the third driver to collect his first Camping World Truck Series win at the famed superspeedway (Robert Pressley - 2002, Michael Waltrip - 2011) and the only Truck series Rookie to accomplish the feat.

Comments from the driver: "I'm a rookie, this is unreal. This Red Horse Racing team is unbelievable. This is a dream come true. I knew what the organization was when we went to Red Horse. I didn't know how great it was. Thank you, Tom DeLoach, everyone at the shop, JGR Engines and Toyota. I've never driven anything to smooth in my life."

"My expectations were to just come out and finish the race. It wasn't until we made it into the top-five on the restarts that I thought, 'Man, this could happen.' There were a couple of uncertainties with the green-white-checkered's we had to encounter, but Timothy stuck with me on that restart and pushed so we made it happen."

The Truck Series returns to action on Saturday, March 31st at Martinsville Speedway for the Kroger 250 which can be aired live on SPEED at 1:00 p.m., ET.