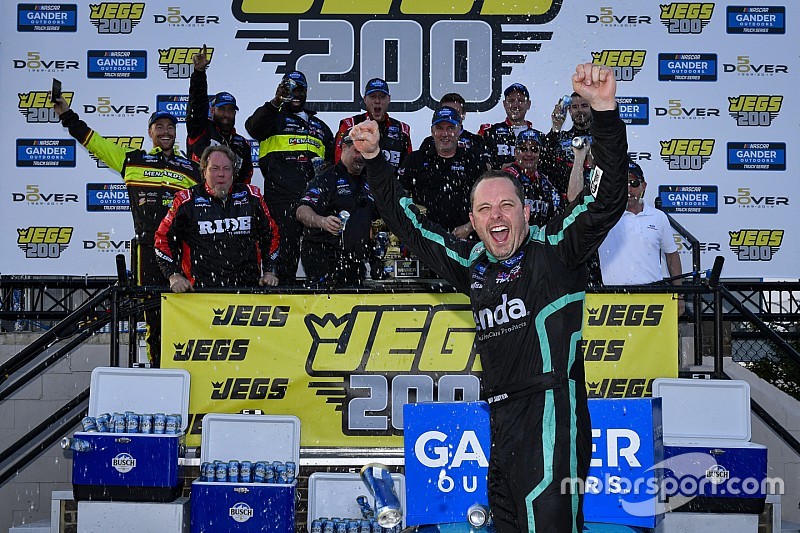 Sauter held off reigning series champion Brett Moffitt on a restart with five of 200 laps to go and hung on to win Friday’s Jegs 200 at Dover (Del.) International Speedway.

The win is Sauter’s third consecutive victory at Dover and 24th of his career. His win all-but locks him into the 2019 playoffs in his first year back at ThorSport Racing.

"When you get kicked to the curb, you feel like you have a lot to prove," Sauter said after the win. "I have to thank Duke and Rhonda Thorson most importantly - a couple months ago I didn't know if I'd be racing.

"To get three in a row here is extra special. I have to thank these guys. I was highly motivated. I shut the motor off earlier today in the race and it wouldn't re-fire and I was like, 'Oh well.' Track position was so important but experience paid off.

"It's so special. This ranks up there as one of the biggest wins of my career. We've got to keep it going - that's the main goal here, not to get complacent. I knew after Atlanta we'd have a shot to win races. I felt like we gave one away at Martinsville but got it today."

On Lap 112, Korbin Forrister spun off Turn 4 and tagged the wall to bring out first non-stage caution of the race. On the restart on Lap 118, Sheldon Creed remained out front.

Burton moved up to second and challenged for the lead after the restart but settled into the second position.

Austin Wayne Self spun on the frontstretch on Lap 154 and made some contact with Todd Gilliland to bring out a caution. All of the lead-lap cars elected to pit, with Ben Rhodes the first off pit road thanks to a two-tire pit stop.

On the restart on Lap 160, Ben Rhodes led followed by Stewart Friesen, Creed, Moffitt and Enfinger.

Shortly after the restart, Creed spun off Turn 2 in an incident that also collected Gilliland and Tyler Ankrum to put the race back under caution. Rhodes remained in the lead on the restart with 35 laps to go, followed by Moffitt, Friesen and Burton.

With 10 laps remaining, Brennan Poole got into the wall to bring out a caution and bunched the field one more time. The race returned to green with five laps to go and Sauter in the lead.

Sauter took the Stage 2 win by holding off a tough challenge from Creed, collecting his second stage win of the season.

Moffitt was third, Enfinger was fourth and Austin Hill completed the top-five.

Following the break between Stages 1 and 2, Moffitt was the first off pit road and resumed the lead when the race returned to green on Lap 55.

With 30 laps remaining in the second stage, Moffitt maintained a small lead over Creed with Sauter running in third.

Crafton had worked his way up to seventh with 25 laps to go in the second stage but was complaining about problems with his engine. His team already had to change engines on Friday.

On Lap 82, Sauter deftly navigated lapped traffic and used a three-wide move to get around Moffitt and take the lead for the first time in the race.

With five laps to go in the stage, Sauter had moved out to almost a one-second lead over Creed.

Moffitt easily held off Sauter in dominating fashion to take the Stage 1 victory as he led all 45 laps.

Creed was third, Enfinger fourth and Burton completed the top-five.

Moffitt, who started on the pole, took command early and had moved out to half-a-second lead over Sauter after 10 laps.

On Lap 15, Creed moved into the third position behind Moffitt and Sauter, with Friesen fourth and Enfinger fifth.

With 25 remaining in the first stage, Sauter had reached the rear bumper of Moffitt but couldn’t complete the pass for the lead.

Moffitt continued to maintain an almost one-second lead over Sauter with 15 laps to go in the stage.

Crafton, who had to start the race from the rear of the field, had worked his way up to 11th with five laps remaining.

Prior to the start of the race, five drivers had to start the race from the rear of the field – Crafton and Ryan Sieg for engine changes; Spencer Boyd for going to a backup truck; and Tyler Hill and Jennifer Jo Cobb for unapproved adjustments.