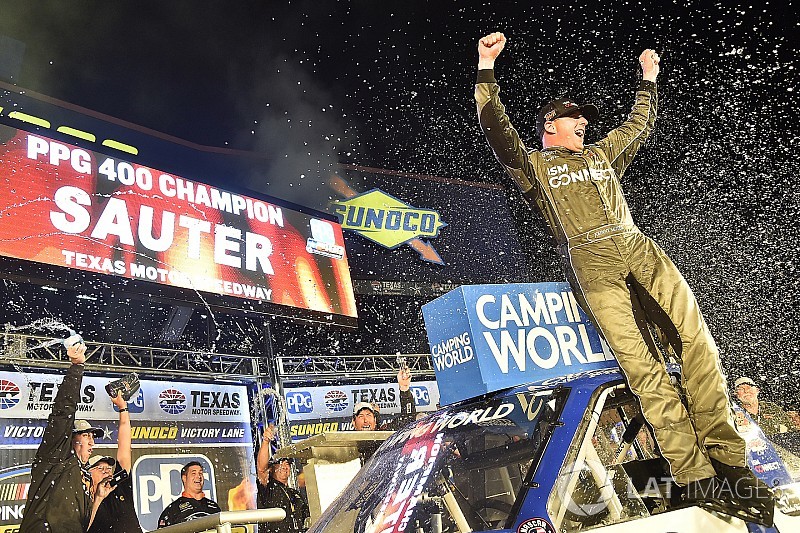 Johnny Sauter clinched victory at Texas Motor Speedway in a two-lap shootout to the checkers, driving his GMS Chevy to a 0.092sec win over Stewart Friesen’s Halmar Friesen Racing entry.

Polesitter Stewart Friessen took the lead from the start in his Halmar Friesen Racing but rapidly fell to fourth as Noah Gragson moved his Kyle Busch Motorsports Toyota into the lead chased by teammate Todd Gilliland with Johnny Sauter third for GMS Racing. However the seventh lap saw Justin Fontaine into the wall with a puncture.

Brett Moffitt was the highest-placed driver to take the opportunity to pit, bringing his Hattori Toyota in from ninth and rejoining 21st. It took just a lap for Bayley Currey to swipe the Turn 3 wall and out came the yellows once more.

Ben Rhodes moved up to fourth in the ThorSports Ford behind Friesen and ahead of Spencer Davis in a third KBM truck.

Moffitt smacked the wall to bring out the yellows, and several teams took advantage and pitted, including Gilliland and Davis but they emerged in 13th and 14th.

By the end of the stage, it was Friesen leading two ThorSport trucks – veteran Matt Crafton followed by Myatt Snider – and two GMS trucks, those of Sauter and Cody Coughlin.

Sadly, Rhodes went three laps down just before the end of the stage with a suspected tire failure, while Gilliland had sliced through the pack to ninth.

Spencer Davis took the lead at the start of the stage, but was being pressured by Gilliland, and within 10 laps he had the lead, while Grant Enfinger had put yet another ThorSport Ford toward the pointy end of the field. Enfinger demoted Davis on Lap 11, and soon Friesen had done the same.

Although Gragson pressured Davis, the pair were being caught by Sauter’s Chevy. That battle would be put on hold, however. Bo LeMastus smacked his DGR-Crosley Toyota against the wall after cutting a right-front tire against Norm Benning which brought out the yellow six laps before the end of the stage.

Marcus Richmond, Gilliland’s crew chief, pulled his man in before the end of the Stage, sacrificing the stage win points to get track position for the third stage.

There was a one-lap sprint to the end of the stage, won by Enfinger ahead of Friesen, Justin Haley in a GMS Chevy, Austin Hill in the Young’s Chevy, with Gilliland rising from eighth to fifth in just one lap.

Richmond’s plan had worked perfectly, Gilliland emerging from the Stage stops as the leader alongside teammate Gragson, with Sauter and Crafton side by side right behind until Davis split them. Crafton’s momentum was such that he also zapped Gragson but within 3 laps he was already 0.6sec down on Gilliland. That would soon change however, as Sauter charged, these two rapidly pulling away from the chasing pack, led by Gragson, Crafton and Davis.

Meanwhile Friesen was having to claw through from eighth, but he was better off than Stage 2 winner Enfinger who had tumbled to 14th following the four-lap yellow for the end of Stage 2.

After one strong challenge to leader Gilliland, Sauter’s pace initially became blunted and he fell to 1sec behind, and then closed up again with 65 to go. The lead concertinaed in and out yet it wasn’t slowing them down. With 61 to go, the pair were only a tenth apart yet 4sec up on Gragson but their efforts were wasted by yet another yellow – this time for Snider colliding with Jennifer Jo Cobb after Dalton Sargeant’s GMS Chevy appeared to run into Snider’s Ford.

The leaders took the opportunity to pit with Gilliland emerging behind Sauter, albeit now second and third behind Chris Eggleston (DGR-Crosley). Behind them were Haley, Gragson, Davis, Crafton and Enfinger.

At the restart, Haley made the best of it to dive past Eggleston, with Sauter, Davis and Gilliland, Gragson, Crafton getting past Eggleston too.

Sauter took the lead around the outside of Haley with 50 to go but the 2016 champion couldn’t make a break, Haley staying close, the pair of them dropping Gilliland who himself was well clear of Crafton.

The other man on the charge was polesitter Friesen. He was up to sixth ahead of Davis; with 40 to go he’d passed Gragson for fifth, and 32 to go he’d levered his way past Crafton for fourth. Once there, however, he lay 3 seconds behind third-placed Gilliland.

With 18 to go – and the prospect of green-flag stops looming as the teams couldn’t quite get to the end at racing speed – Moffitt was the inadvertent savior of the day. He looked like he’d scraped the wall (he hadn’t) and that was enough to bring out the yellow.

KBM’s Gilliland, Gragson and Davis all stopped for four new tires, emerging from the pits in seventh, eighth and ninth, but Sauter, Haley and Friesen stayed out to fill the top three places. Between Friesen and Gilliland lay Crafton, Enfinger and Tyler Young (Young’s Motorsports). They could prove the crucial buffer to prevent the fresh-tired KBM cars from reaching the top three.

The green waved with 13 laps to go and Sauter hit the front as Friesen maneuvered past Haley with Crafton attempting to do the same but unable to make it stick. Then the yellow flew for a ninth time with nine to go as Jordan Anderson clouted the wall and was unable to creep his Chevy to the pits.

The two-lap sprint to the checkers again saw Sauter leap into the lead with Friesen deposing Haley once more for second, and Sauter comfortably held on to the lead to clinch his fifth Texas victory and his fourth win of the season.

Enfinger did an excellent job to nip Crafton for fourth with Gilliland taking sixth ahead of Young, Coughlin, Davis and Gragson.

GMS Take on Trucks: The winning combination of Sauter and Shear