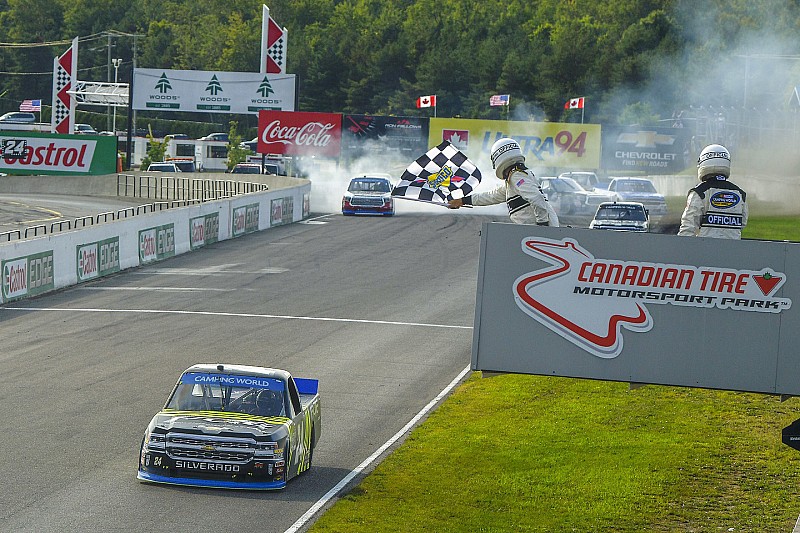 After a late-race caution for Austin Wayne Self, the Camping World Truck Series race from Canadian Tire Motorsports Park was pushed into overtime. On the two-lap shootout, Todd Gilliland got away as he searched for his maiden win.

In hot pursuit was Noah Gragson, who got to him just before the final set of corners. As they cut around to the final turn, Gragson dove to the inside of his teammate, sending both of them spinning in a flurry of smoke.

Several trucks collided behind them as the field raced by and it was Justin Haley who made it back to the line first to claim the victory.

It was a massive win for Haley, who takes over the championship lead after what was the first race of the CWTS Playoffs. He now leads Johnny Sauter by 35 points and has an automatic pass into Round, courtesy of the win.

"That was amazing," said Haley. "I knew going in there, Noah was going to do something not the smartest."

Ben Rhodes and Grant Enfinger find themselves in the bottom two positions in the standings (which are eliminated at the conclusion of Round 1).

Gilliland, who ultimately finished 11th, was fuming after the race. "Should have never let him get to me," he said. "Should have just given him the inside and maybe let him wreck himself -- I don't know. He's done that to me in five or six road courses and it sucks.

Gragson was confronted by both Gilliland's father and his crew chief after the race, and he took full responsibility for the incident. He finished ninth.

"Just unfortunate, that was on me. Just trying to get a little too much trying to win."

Rhodes led the field to the green flag to commence the 64-lap race and held serve for in the opening laps. Stewart Friesen was the first title contender to find trouble, spinning on the third lap.

On Lap 7, Gragson took the lead for the first time and led for the remainder of the stage. Back in the pack, Sauter got into Myatt Snider and sent him spinning.

Gilliland and Alex Tagliani were among those who chose to short-pit before the end of the stage, but it was Gragson with the max bonus points for winning Stage 1.

Peters actually opted to stay out and inherited the lead for the start of the second stage, but it wasn't long before he was overtaken by both Gragson and Haley.

Halfway through the stage, the caution flew when Max Tullman stopped off to the side of the course. Cody Coughlin, Peters Sauter and Enfinger all decided to pit during the yellow, but Enfinger was penalized for taking his gas can with him when he left the pit lane, as it was still attached.

The restart came with six laps remaining in the stage and Gragson would once again soundly take the stage win. He was followed by Moffitt, Haley, Nemechek, Crafton, Friesen, Sauter, Peters, Enfinger and Sauter.

Ben Kennedy "possibly" interested in one day being NASCAR CEO