Last Time Out: Justin Lofton qualified 24th for the 150-mile race at Phoenix two weeks ago, but despite a strong truck with a storied background within the Germain Racing stable, the Ryan Fugle led team suffered a setback when the throttle stop backed out, sending the No. 77 Toyota to pit road for prolonged repairs early in the running. Lofton made the best of the remainder of the race, running lap times consistent with top-10 trucks. Lofton and team ended the night in the 30th position. 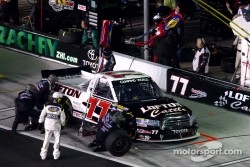 Lofton at Darlington: Lofton logged his highest qualifying effort to date, qualifying in the third position, last August in Darlington. Though the track is dubbed "Too Tough to Tame" the California native had no problems early on learning the ropes around the abrasive 1.366-mile track. After laying down the top-five starting spot, Lofton ran a stellar race, maintaining a spot within the top-five most of the night before a late race run-in dropped him to 20th at the finish.

Down Time Details: Lofton spent the off weekend in between Phoenix and Darlington in his hometown of Brawley, California, shooting a music video with his production company Weekend Warriors TV. Lofton, along with co-owners, sister Brittany Lofton and business partner Brett Bortle, spent Saturday and Sunday filming with rock band Paperback Hero for their single Breath of Time. Following Darlington, Lofton and the WWTV crew will head to the Field Filler Fairgrounds for some go-kart racing. During his break in competition next weekend, Lofton plans on heading to Colorado to partake in snowmobiling with friend Rusty Szymanski. Szymanski serves as Lofton's navigator when he's behind the wheel of an off-road machine.

Truck Information: Lofton will race chassis GR010 this week in Darlington. Lofton and the No. 77 team ran this truck two weeks ago on the one-mile Phoenix International Raceway. The truck has a solid history within the Germain Racing stable. Teammate Todd Bodine raced the truck numerous times last season en route to multiple top-five runs.

Lofton on Darlington: "I am really excited for Darlington. As a rookie, I had a really good run there last year. I really liked the track. It's unique and challenging but a lot of fun to race. My teammate Todd Bodine won there last year, so that just gives the team an added boost heading into the weekend."

Crew Chief Ryan "Rudy" Fugle on Darlington:"The team had a chance with the week off to focus on all of the small details and because of that, we are heading to the track this weekend rejuvenated. We're going to start fresh and put the first two races and the bad luck behind us. This is a good truck and Justin ran really well in Darlington last year. We plan on running up front and mixing it up for the win."