Kansas 250 was good for Blaney and hopeful for Logano

Ryan Blaney, driver of the No. 29 Cooper Standard Ford F-Series, made second career start at Kansas Speedway Saturday afternoon, after posting a 11th place finish in the NASCAR Nationwide Series race in October of 2012. Blaney qualified his Ford F-Series in the 19th position Saturday morning. 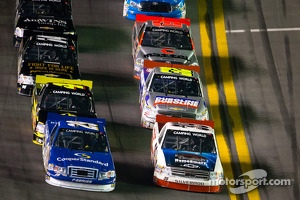 After moving up six places, while battling a loose race Truck, Blaney saw the caution flag wave for the first time of the afternoon on lap 13. Crew chief, Doug Randolph, directed Blaney to bring his F-Series on to pit road for fuel and a track bar adjustment, with the intention of tightening his machine up in the corners.

Caution three came on lap 28 due to a crash by the No. 7 Truck between turns three and four. Randolph, again, brought the No. 29 Ford F-Series to pit road for four fresh tires and fuel. When the green fell on lap 33, Blaney was slated in the 22nd position and moving quickly to the front right before the leaders tangled and brought out the fourth caution on lap 34.

Spotter Joey Meier checked in with Blaney to get some in-car feedback, which was positive enough to keep Blaney on track in favor of track position. Owner Brad Keselowski, radioed in to assure Blaney that he would stack up behind slower Trucks on the restart and there wouldn't be an issue moving forward once they went back green.

Blaney and Randolph continued to improve the F-Series throughout the day at Kansas Speedway, which yielded results in the latter stages of the race. The eight caution of the afternoon fell on lap 109. Randolph brought the Cooper Standard No. 29 to pit road for four fresh tires and maximum fuel, playing strategy with the hope of late race track position.

The red flag was displayed on lap 120 for a Todd Bodine crash, Blaney restarted in the seventh position on lap 125, where he started to rip through the field in his Cooper Standard Ford. With momentum and his Ford coming to life towards the tail end of the race, Blaney was in hot pursuit of Brendan Gaughan, passing him with just two laps remaining to finish third at Kansas Speedway. Blaney came on the radio after crossing the start / finish line, thanking his team for the incredible job they did all day long to get him to the front.

Blaney and the No. 29 Cooper Standard team now sits 4th in NCWTS driver point standings, 33 points back from first.

Ryan Blaney: "My team today battled hard and it paid off. This is a testament to all the work BKR and Ford Racing have put in the past months to get to a competitive level week in and week out at the race track. We look forward to heading into a small break in action building on the momentum we currently have achieved. Charlotte is a few weeks away and I can't wait to get back in my Cooper Standard Ford F-Series and go racing!"

Joey Logano, driver of the No. 19 Reese Towpower Carbon Forged Ford F-Series, made his second start for Brad Keselowski Racing (@TeamBKR) in the NASCAR Camping World Truck Series (NCWTS) during the SFP 250 at Kansas Speedway on Saturday. Logano qualified in the 16th position.

Logano got off to a solid start, moving into the top ten after a few caution flags fell early. When the first caution fell on lap 13, for a spin on the frontstretch, crew chief Chad Kendrick brought the Reese Towpower Ford F-Series down pit road, changing the right side tires, making a track bar adjustment, adjusting air pressures and topping it off with fuel.

The yellow flag waved again on lap 34 for the fourth time of the afternoon for a tangle in the frontstretch, involving teammates Miguel Paludo and James Buescher. Kendrick kept Logano out for track position, which ultimately placed him in the 6th position for the restart on lap 39.

Kendrick brought Logano and his F-Series machine down pit road under green for four tires and fuel on lap 71, putting him in the 14th position when he got back up to speed. An untimely caution came out for debris on lap 82 and put Logano one lap down. The No. 19 received the wave-around and was positioned 14th on the lead lap right before the restart on lap 87.

The BKR No. 19 Ford F-Series Reese Towpower Carbon Forged Truck had a terminal failure on lap 99 when there was an oil pump issue, which ended Logano's day early in the 24th position. Logano is slated to run three additional NCWTS races for BKR later this season.

Joey Logano: "It was a great weekend to build chemestry with the No. 19 Reese Towpower Carbon Forged team this weekend at Kansas, I just wish we had the results to show for it. Rockingham was great because it allowed me to get familiar with the team and the trucks once again. I really want to win one of these NASCAR Camping World Truck Series races bad. Thanks again to Brad (Keselowski) for the opportunity, I'm excited for my next shot to drive one of his Ford F-Series trucks"

Runner-up finish for Coulter at Kansas