MOORESVILLE, N.C. (April 8, 2013) - Joey Coulter has had the type of success in his early racing career that most "young guns" only dream about. At the ripe age of 22, with 49 NASCAR Camping World Truck Series starts under his belt, Coulter's resume already includes a Rookie of the Year award, one win (Pocono, 2012), three poles, 120 laps led, 13 top-five and 28 top-10 finishes. Entering his 50th career Truck Series start this weekend in the N.C. Education Lottery 200 at Rockingham (N.C.) Speedway, the young but experienced wheelman is showing no signs of slowing down anytime soon. 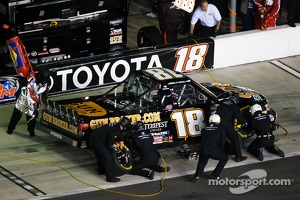 After producing a third-place finish in the 2012 championship standings, Coulter enters his third full-time season in the Truck Series and his first for Kyle Busch Motorsports (KBM) with only one goal in mind this year, to win the first-ever driver's championship for his new team. After two subpar finishes to start the season, a 22nd-place finish at Daytona (Fl.) International Speedway and a 15th-place finish at Martinsville (Va.) Speedway, he knows that he needs to begin producing the results that he is capable of if he hopes to accomplish that goal.

This weekend he will pilot the No. 18 Darrell Gwynn Foundation Tundra and although only 22, serves as the veteran among KBM's crop of young talent. Making his fifth start at Rockingham (N.C.) Speedway, Coulter has logged 748 laps around the high-banked track including one start in the Truck Series (2012) and three ARCA Racing Series starts. At a track that is still very "green" to the series, Coulter feels he will have an advantage on many drivers in the field with his experience managing tires on the aged surface.

Coulter comes into the third event of the season 15th in the Truck Series championship point standings; a mere 13 points behind 10th-place Ryan Blaney and 43 markers behind point's leader Johnny Sauter. He knows that although those results aren't ideal, his championship bid is still very much alive. After the second race of the season in 2012, Coulter was 26th in points; 17 points behind 10th-place, Todd Bodine and 42 points behind leader, John King. A rock solid finish in this weekend's event will allow the young driver to continue his assault up the leader board.

This weekend's event will mark your 50th career Truck Series start. Can you recap your career to date and what your goals are moving forward?

"Definitely no complaints, it's been a great two-plus years and 49 starts. I can't believe I've made 50 starts already though. I'm 22 and having two younger teammates makes me feel old, I was 20 when I made my first Truck Series start and my teammate Erik Jones is 16. I'm honored to be a driver in this sport and to be fortunate enough to make one start is big, but 50 starts is a dream come true. The first two years were fantastic and the start of this season has been even better. I'm just getting started though and I'm excited about my future and the future of this KBM team."

What are the challenges of racing at Rockingham?

"You have to be so mentally disciplined there because the first three laps that you're out there your truck feels amazing -- you've got tons of grip, you can do whatever you want, go wherever you want to go and then lap four and a half, somebody turns the light switch off and at first you kind of drive around there for a few laps going, 'Wait a minute, what happened?' It's definitely one of those places that takes a few times to really get used to it. Everything that we learned last year running and everything that we've already seen some of the Tundra's do there, I think we're in good shape for this year."

You took Joey to a dirt short track Saturday night to race a super late model. How does staying behind the wheel in different series help him as a driver?

"All the different series that Joey races in really helps him adapt quickly and become a stronger driver. The practice time that you get in those series is basically a green-white-checker, so when you show up there you get two laps and then line-up to qualify. According to how they lay the event out, they usually lock-in the top 10, or even less sometimes from qualifying for the main feature. If you don't lock yourself in during qualifying, you have to run a heat race. So, not only do you have to be sharp and aware of your environment right off the truck, you have to be on your "A" game. When you come off the truck, there is no hesitating; you have to be wide open when you hit

the race track. So, I feel like that helps Joey a lot, he has to be on kill right away. Also, the engines in those cars are animals; over 900 horsepower, 800 pounds of torque, just a huge beast to try and control on a surface like dirt; so it helps with car control, throttle control, tire management, and the attention to detail. Things happen so fast and there is such a limited time to practice that you don't have an opportunity to warm up to it, you have to show up, get in the ring and be ready for the knockout punch as soon as you get in there."

Chassis KBM 008:Chassis KBM-8 went to Victory Lane in its debut in the 2011 N.C. Education Lottery 200 with Kyle Busch behind the wheel at Charlotte (N.C.) Motor Speedway. Jason Leffler qualified fourth, a chassis-best and was running second when an engine failure on lap 19 ended his day early in last year's race at Rockingham. The Tundra made seven total starts over a two year span, collecting one win, three top-five and four top-10 finishes.