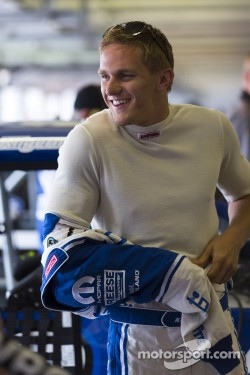 Since making his first NCWTS appearance in 2010, Kligerman has posted six top-five and 16 top-10 finishes in 37 career starts. The 22-year-old currently sits sixth in the NCWTS championship point standings, 35 markers behind leader and teammate, Timothy Peters. Chad Kendrick, who led the No. 7 Tundra team to victory in the season-opening NCWTS event at Daytona, will call the shots for Kligerman.

"When you look at truck series teams right now, there's no doubt Red Horse Racing is definitely one of the top organizations. I feel like Red Horse gives you the best equipment they can and at the end of the day that's all you look for as a driver; the actual chance to win, not just the trophy. So it's our job now to go out there and get the trophy and I feel like this is a place I can do that," Kligerman said.

Double Duty: Kligerman will have a full schedule behind the wheel ahead of him at Michigan this weekend as he makes his first start for Red Horse Racing. Aside from his inaugural run in the No. 7 Tundra for the NCWTS event, Kligerman will also fill in during NASCAR Sprint Cup Series practice and qualifying in the No. 22 Penske Racing machine. Kligerman, who was scheduled for this fill in position prior to signing with Red Horse this week, knows that he will have less time on his hands, but is confident he will have no issues balancing both schedules.

"I've done a lot of testing in the cup car before so it should be a seamless transition. Aside from having little time between practice sessions, there should be no issues with the schedule. I'm a professional race car driver and my job at the end of the day is just worry about driving as fast as possible, so that's what I'm going to do," said Kligerman.

Chassis History: The No. 7 Red Horse Racing crew, led by crew chief Chad Kendrick, pulled together to prepare chassis number 001 for their driver in his first appearance for the team a Michigan. This particular Tundra showed significant speed in its only two starts earlier this year and has been rebuilt for competition this weekend.

What's your take on the new characteristics of Michigan and what the racing will be like?
"Michigan used to have a lot of tire wear and was multi-grooved, one of the fastest tracks we went to all year because of the long straightaways. Going back now it's been repaved, and from what we've heard about the repave and seeing the Sprint Cup Series race and the grip level, I feel like this is going to be one of the most exciting races of the season; simply because I think you're going to see a great mix of pack drafting like we've seen at Daytona and Talladega, but with a little more handling than we've been accustomed to at those two tracks. Those things combined are going to make it really good.

Do you have any favorite Michigan memories?
"I won the ARCA race in 2009 at Michigan and that was exciting. Last year we were in the top-five for most of the race and contended for the win until getting involved in a late-race mishap that ended our day. It's a place I've been able to have successful runs at and hope to continue that this weekend."