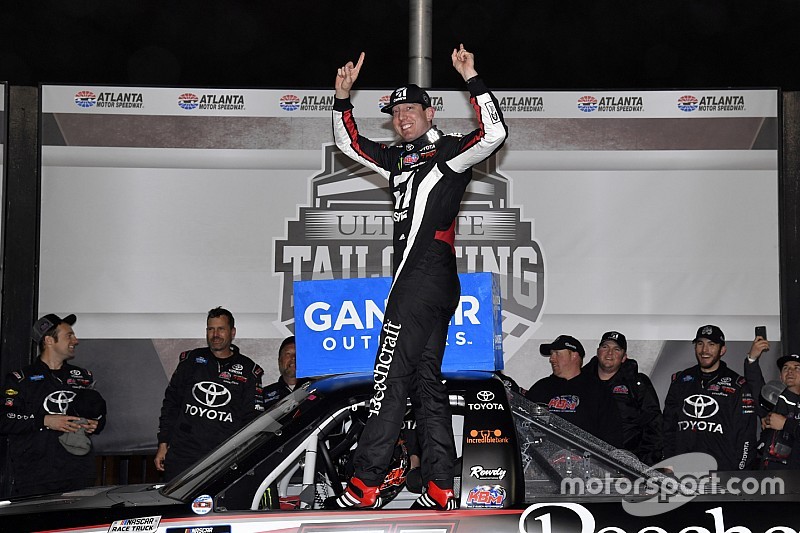 Kyle Busch had to wait a while but set yet another NASCAR record.

Weather finally won out on Saturday, forcing NASCAR to call the Ultimate Tailgating 200 with five of 130 laps remaining and Kyle Busch sitting in the lead.

The win is the 52nd in the Gander Outdoors Truck Series for Busch – the most of any driver. Busch and NASCAR Hall of Famer Ron Hornaday Jr. had been tied with 51 career wins apiece.

"It certainly means a lot. I want to thank our amazing partners that allow us to do what we do," Busch said in Victory Lane. "I can't say enough about my guys at Kyle Busch Motorsports - they do a phenomenal job.

"I slipped getting out of my truck - it's a little wet out here in case y'all didn't notice. It was a great race out there. I wish it would have ended. I would have liked to have seen Harrison (Burton) finish second. I'm not sure how far he fell. He ran a great race today."

Following the break between Stages 2 and 3, Busch was the first off pit road and led the way when the final stage went green on Lap 88 followed by Moffitt, Harrison Burton and Enfinger.

Sauter quickly made his way around Busch and claimed the lead on Lap 89. Busch grabbed the lead back on Lap 92 on the backstretch.

With 25 laps left in the race, Busch held about a one second lead over Sauter with Crafton running in third.

On Lap 112, Natalie Decker spun off Turn 4 for the second time in the race to bring out a caution. All of the lead-lap trucks pit for new tires with Busch again the first off pit road. Crafton was forced to pit a second time with a loose wheel.

The race returned to green with 13 laps to go.

On the restart, several trucks got together coming down the frontstretch to bring out a caution and then a red flag as NASCAR needed to clear the track of debris.

Among those involved in the incident were Parker Kligerman, Jesse Little, Austin Wayne Self, Chad Finely and Spencer Boyd.

After a red-flag period to wait out rain, the race returned to green on Lap 125 with Busch still in the lead.

After pitting for a loose wheel, Busch drove the field to take the Stage 2 win over Rhodes.

Burton finished third, Sauter was fourth and Moffitt made his way up to fifth after a pit road penalty.

Following the break between Stages 1 and 2, Enfinger was the first off pit road and led the way when the stage went green on Lap 47. He was followed by Crafton, Sauter and Busch.

Moffitt had to start from the rear of the field following an uncontrolled tire penalty during his pit stop.

On Lap 53, a caution was displayed for debris on the track after Joe Nemechek ran into the grass and grass and dirt got on the track surface. Busch elected to pit for what he believed was a loose wheel.

Sauter led the way on the restart on Lap 58, followed by Enfinger and Rhodes. Busch restarted in 24th.

Rhodes moved into the lead before the completion of one lap as ThorSport Racing claimed the top four positions.

By Lap 67, Busch had made his way through the field and into the third position.

With five laps left in the stage, Busch was running second, just over a second behind Rhodes.

With two laps to go, Busch got around Rhodes and reclaimed the top spot.

Busch easily took the Stage 1 win by more than 3 seconds over Burton, his KBM teammate.

Hill started on the pole after qualifying was rained out and the lineup set by 2018 owner points but Burton quickly moved into the top spot at the start.

Kyle Busch wasted little time move to the lead, going from sixth to first in one lap as passed Burton.

On Lap 16, Decker wrecked after spinning off Turn 4 to bring out the race’s first caution. On the restart on Lap 20, Busch led the way followed by Burton and Rhodes.

With 15 laps to go in the stage, Busch led Burton by more than a second as Sauter moved up to third.

Busch expanded his led to almost 3 seconds over Burton with 10 laps remaining in the first stage. Enfinger moved into third as Sauter dropped to fourth.

Chandler Smith to compete in NASCAR Trucks with KBM