Kyle Busch determined to double down at Dover

MOORESVILLE, N.C. (May 28, 2013) - Doubling down is a common occurrence at the black jack tables located inside Dover Downs Hotel and Casino, but it's on the one-mile concrete oval adjacent to the property where Kyle Busch hopes to be doing his doubling down on Friday. The driver of the No. 51ToyotaCare Tundra will take aim at his second consecutive NASCAR Camping World Truck Series victory of 2013 in Friday's Lucas Oil 200. If he is successful, it would also be his second consecutive Truck Series win at "The Monster Mile," having won in his last series start at the challenging track. 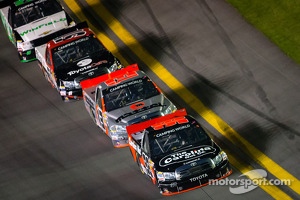 In the series last stop at Charlotte (N.C.) Motor Speedway, Busch overcame a pair of engine issues in practice and a pit road miscue by his over-the-wall crew while leading near the halfway mark to pick up his first Truck Series win of 2013. The win was his first in the Truck Series since dominating the 2011 event at New Hampshire Motor Speedway in Loudon, breaking a seven-race winless streak, amazingly his longest drought in Truck Series action since going winless over a span of 13 races in 2006 and 2007.

The last time Busch was in a truck at Dover, he led 128 of the 200 laps en route to victory in the 2011 Lucas Oil 200. The 28-year-old also won in his first career Truck Series race at the 1-mile oval in 2005, making him the only repeat winner in 13 races at the track. While he has only collected two wins, the talented wheelman has been a threat to win in all seven of his starts in NASCAR's third division at the Delaware track. He has led double-digit laps in every start and 75 or more laps in each of his last six, but varying issues of bad luck - a fuel pump in 2010, tire problems in 2007 and 2009, a transmission in 2008 and a hood pin in 2006 - have kept him from leading the most important lap, the last one.

You can bet that the Las Vegas native will be a threat to win again in Friday's 200-lap event as he looks to double down and register consecutive Truck Series wins, both on the 2013 schedule and in series starts at Dover. A Truck Series win would also serve as successful start in his quest to deal three aces this weekend - wins in all three series.

Kyle Busch, Driver of the No. 51 NCWTS Toyota Care Tundra:

Is the spring Dover weekend one that you approach as being able to win all three races?
"I've been very successful in all three series at Dover, so this spring race is one that I look at as a possible triple-win weekend. The concrete surface is very slick and some drivers don't like the concrete feel one bit, while other drivers like it. For me, I enjoy going to Dover and Bristol. They are fun places to race because they are challenging and other drivers don't necessarily get it. The race tracks are slick and having the right mindset going into those races can give you an advantage over the guys that aren't looking forward to racing there. We've had a fast ToyotaCare Tundra all year -- we were in a position to win Daytona if it wasn't for the caution, had one of the fastest trucks at Kansas until we got wrecked and we finally got to victory lane at Charlotte. We've had a really good setup for Dover at KBM in the past, so hopefully I can get the weekend started off right with a win on Friday."

Do you race in the NCWTS to win or to help build KBM?
"You're trying to help -- the first couple years I was helping build the program because we didn't have one and now it's to come out here and have a third truck on the race track and to have those guys be able to lean on somebody. They come to me, they ask me questions and what Rudy (Fugle, crew chief) and I do on this truck, it is an open notebook and they can have anything they want off this thing."

Rudy Fugle, Crew Chief of the No. 51 NCWTS ToyotaCare Tundra:

Does winning your first race as a crew chief make you hungry for more?
"It was fun for our team to get rewarded for all of the hard work they have put in this season. We had been close to winning a few times already this year and hopefully we can knock off a bunch more starting Friday. Kyle's been really fast in the trucks at Dover and we'll be unloading with a setup similar to what he has had there the last few times, so I expect we'll be fast again."

Chassis KBM-09: Friday's Lucas Oil 200 will be the first time on the track this season and 10th career start for KBM-09. The last time the Tundra was in action, Kyle Busch started sixth, led 45 laps and finished second at Homestead-Miami (Fla.) Speedway last year. The Toyota has seven top-10 finishes and has qualified inside the top five six times.