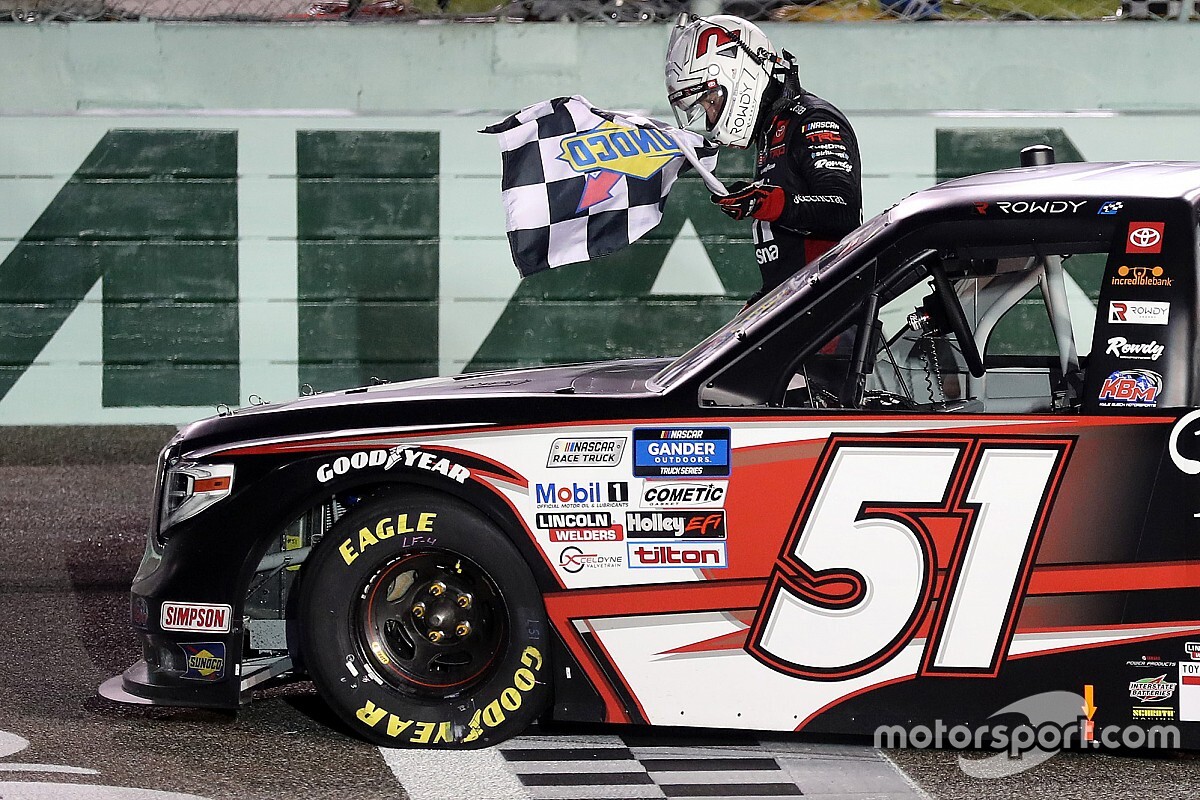 There was no stopping Kyle Busch in Saturday night’s 25th Annual Baptist Health 200 at Homestead-Miami Speedway, no matter what was thrown at him.

Busch had to start from the rear and take a drive-through penalty on the opening lap due to an L1 penalty in pre-race technical. He explained: "The deal with the infraction was just a fluke deal, it was a bar that was legal here last year but not legal this year, and it hadn't been back to the fab shop."

Despite brushing the wall on his first run, Busch returned to imperious form in stage two, storming from ninth to first in a handful of laps.

Busch fired off swiftly at the start of the final stage, heading Ross Chastain and Austin Hill, as Christian Eckes almost wrecked off Turn 2 and slipped to the bottom of the top 10.

Chase Elliott was on the move, grabbing fifth place just before a caution for Brennan Poole spinning at Turn 2.

Busch led Hill at the restart, with Chastain slipping to third. Elliott hit the wall while running seventh and fell outside the top 10. Stewart Friesen moved up to fourth, but then fell back behind Ben Rhodes and Grant Enfinger.

Green flag pitstops among the leaders, and a yellow flag with 30 laps to go when Korbin Forrister hit the wall, put a different complexion on the race. The cleanup was delayed when Sheldon Creed pounded the barrels at the pit entry, so the red flag flew.

Elliott stayed out to save a set of tires, and restarted in the lead. “I’ve driven into the wall about four times,” said Elliott under the red flag. “Hopefully we get another caution to give us a chance win later.”

After a 15-minute delay, Elliott and Eckes led the field to the line with 24 laps to go. Elliott went backwards as Busch toyed with Eckes for a lap before going on his merry way to victory. Rhodes, Hill and Chastain all passed Eckes, prompting a three-way battle for best driver who wasn’t Busch. Rhodes slipped back after suffering a big slide off Turn 4, as Hill pulled away from Chastain.

The caution flew again when Jordan Anderson hit the wall, setting up a sprint to the finish. All the leaders pitted, with Elliott getting the chance to put his final set of fresh tires as the others had to settle for already-scrubbed rubber.

The green flew with seven laps to go, with Busch pulling clear as Hill and Chastain swapped second again. Tyler Ankrum was also on new tires, and surged up to second, with Chastain being forced to settle for third, ahead of a late surging Elliott, Johnny Sauter, Todd Gilliland, the fading Hill and Eckes.

Busch won the second stage following a remarkable march to the front, swerving through the pack and getting the job done in style.

Eckes led at the start, having pitted before the end of stage 1, but the man to watch was Busch, who restarted ninth but pulled an amazing slingshot move off Turn 2 to sweep around those ahead, and was past Eckes to take the lead nine laps later.

Hill and Chastain renewed their battle, this time for second, as lightning lit up the Florida sky and weather threatened.

Chastain finished second, 5s behind Busch, with Hill, Eckes and Gilliland rounding out the top five.

Chastain won the first stage, metronomically working his way forward from 15th on the grid.

Hill led Enfinger and Creed early on, with Chastain moving up to third from his eighth row starting spot by the competition caution on Lap 15.

At the restart, Chastain surged past Enfinger to run second, as a multi-truck wreck off Turn 4 involved Zane Smith, who clipped Chase Elliott into a huge spin and Brett Moffitt got collected in the process.

Despite Hill’s best attempts to block, Chastain and Hill ran side by side as they began the final lap, with Chastain winning out from a fast-finishing Rhodes and Hill.

Busch served his pass-through penalty at the end of the opening lap, but avoided going a lap down. He was back in during the competition caution, however, for attention to his right-rear quarter panel having hit the wall, and ended the opening stage back in 33rd position.