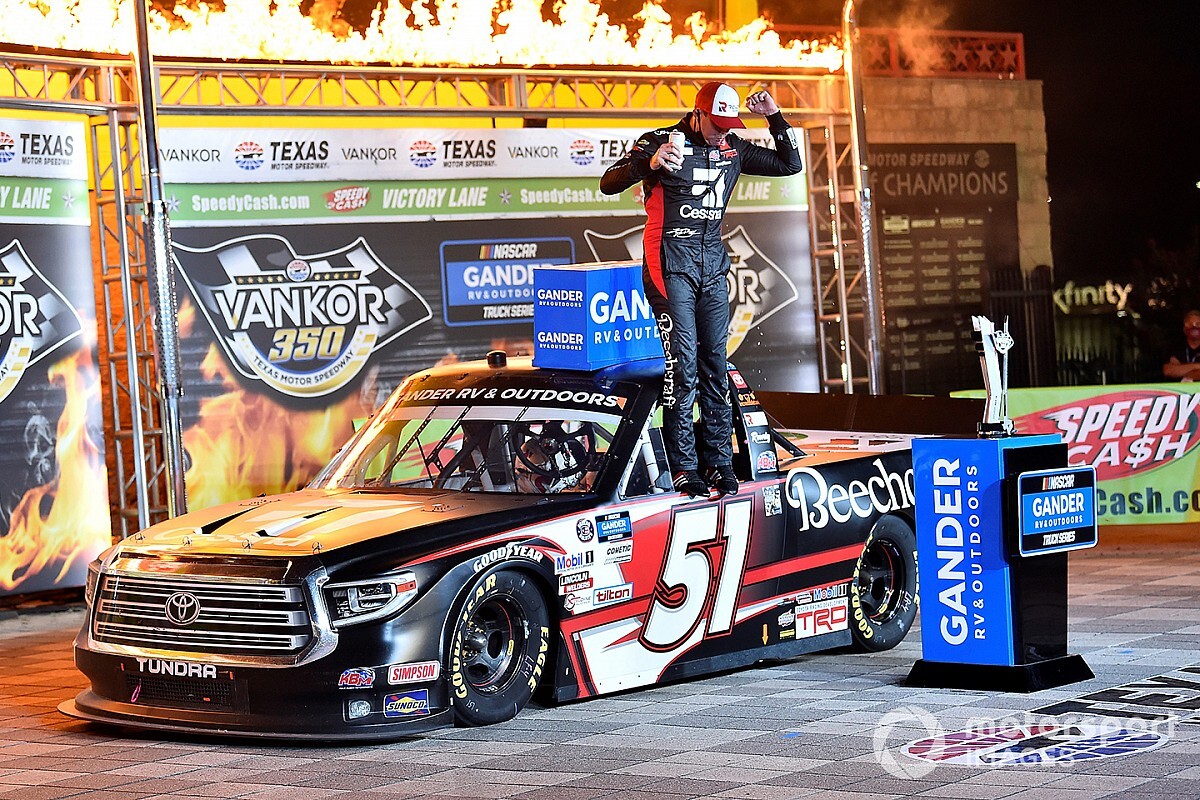 Kyle Busch redeemed himself Saturday night with another trip to Victory Lane, this time in the NASCAR Truck Series race at Texas.

Busch had to survive a tough battle down the stretch with his 19-year-old Kyle Busch Motorsports teammate Christian Eckes to come away with the win at Texas Motor Speedway.

Earlier Saturday, Busch appeared to have won the Xfinity Series race at Texas but his car failed post-race inspection and he was disqualified from the event.

This is Busch’s third series win of the season (in five starts) and 59th of his career. He remains the all-time wins leader in Trucks.

“What can you say about Christian? He’s getting better each and every week and every time out the chemistry is getting better with (crew chief) Rudy Fugle and those guys,” Busch said. “I’m real proud of that (team) running fast.

“He really challenged us at the end but I wanted to make sure we went out on a win. We’ll see if we can’t go for another one tomorrow.”

Asked to describe his day of winning one race, getting disqualified, then winning the next, Busch quipped, “I don’t know. Technically I haven’t won yet, so put it over the (height) sticks.”

On Lap 126 of 167, Zane Smith became the first of the contenders to make their final green-flag pit stop to take enough fuel to make it to the finish.

Once the cycle of stops was completed on Lap 135, Busch returned to the lead. He was followed by Eckes, Ben Rhodes, Todd Gilliland and Moffitt.

With 25 laps remaining in the race, Busch had built is lead to more than 3.3 seconds over Eckes. Moffitt had worked his way up to third, Crafton was fourth and Rhodes fifth.

Gilliland wrecked off Turn 2 on Lap 152 after contact with Rhodes to bring out a caution. Most of the lead-lap trucks remained on the track.

On the restart on Lap 158, Busch led the way followed by Eckes, Moffitt, Crafton and Friesen.

After racing side-by-side for nearly two laps, Busch finally cleared for the lead on Lap 160 as Crafton moved into third.

With five laps to go, Busch was able to maintain a small but steady lead over Eckes.

Moffitt earned the Stage 2 win under caution when a wreck erupted on the backstretch on the final lap of the 40-lap segment.

Following the break between Stages 1 and 2, the lead-lap trucks all pit with Busch the first off pit road and he led the way on the restart on Lap 47.

With 25 laps remaining in the second stage, Busch maintained about a half-second advantage over Eckes while Gilliland ran third, more than 2 seconds behind the leader.

On Lap 61, Smith – who had a slow pit stop under caution – moved into fourth.

A caution was displayed on Lap 62 for Johnny Sauter when his engine let go and he immediately too his No. 13 Ford to the garage.

Most of the lead-lap cars stayed on the track but a handful did pit. Busch remained in the lead on the restart on Lap 70. He was followed by Eckes and Moffitt.

Eckes was able to get around Busch on Lap 71 and came away with the lead.

Jordan Anderson spun off Turn 4 on Lap 74 to bring out another caution. Most of the lead-lap trucks decided to pit with Eckes the first off pit road.

On the restart with two laps to go in the stage, Moffitt – among those who stayed out – led the way followed by Rhodes, Ankrum, Crafton and Derek Kraus.

Busch traded the lead with Smith, the final time with five laps remaining then cruised to the Stage 1 win.

Ankrum was third, Rhodes fourth and Moffitt rounded out the top-five.

Creed, who started on the pole thanks to a random draw, led the first seven laps until a flat right-rear tire forced him to make a green-flag pit stop to fix the problem.

That turned the lead over to Busch on Lap 8 as Smith moved into second.

On Lap 13, Smith got around Busch on the outside to take the lead for the first time in the race.

With 20 laps remaining in the first stage, Smith held a small but steady lead over Busch as Rhodes ran in third, 1.9 seconds behind the leader.

With five laps to go, Busch ran down and reclaimed the lead from Smith while Rhodes remained in third.