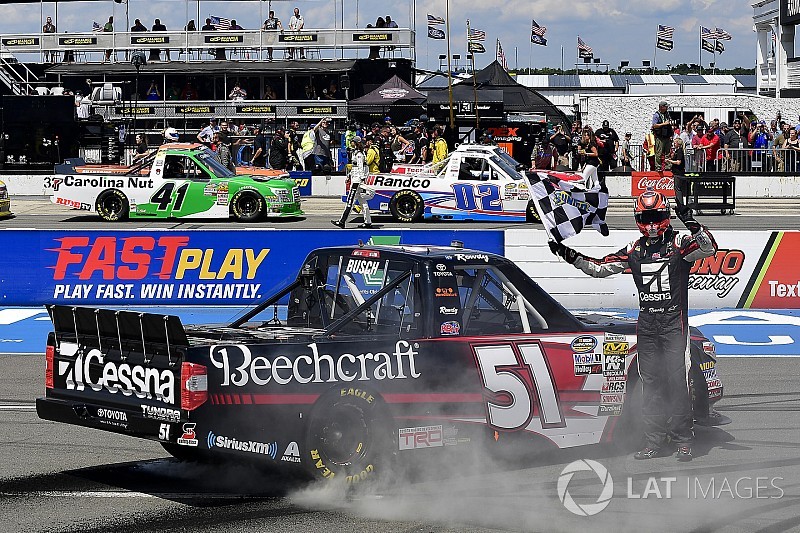 In his final Camping World Truck Series start of the season, Busch held off a tough challenge from Erik Jones to win Saturday’s Gander Outdoors 150 at Pocono Raceway.

The victory is the 51st of Busch’s career, tying him for the most in the series with Hall of Fame driver Ron Hornaday. It’s also the fourth consecutive win at Pocono for Kyle Busch Motorsports.

"The No. 18 (Jones) had a better truck than us here this weekend. I tried to fix this thing to make it better but I probably made it slower with all the things that I kept doing rather than making it faster. I knew Erik was going to be fast in that truck and I knew Noah would have been fast in that truck. They were the ones we had to beat.

"Erik was able to run me down and get there. I did everything I could to hold him off. I knew if I could pinch him for a few laps, his tires would heat back up and might be able to equal out to him. That seemed to be where we fell even with each other."

Jones was a last-minute fill-in for Noah Gragson, who was not medically cleared to compete in the race.

"It was fun. It's not just getting out and running a race, it's running a race in a really good truck. It's been a while since I've been in a truck," Jones said. I had fun. It was probably fast enough to win, I just needed to get back out front and I just couldn't quite do it."

Following the break between Stages 2 and 3, Sargeant took over the race lead, one of eight drivers who elected not to pit. On the restart on Lap 36, he was followed by Joe Nemechek and Jones.

With 19 to go in the race, Jones finally made his way into the runner-up position, but more than two seconds behind Busch.

With 13 laps remaining, Jones had moved to within a second of Busch while Sargeant remained in third, about five seconds behind Jones.

Friesen, who had to start the race from the rear of the field, took advantage of several drivers making green-flag stops and claimed the Stage 2 win.

Following the break between Stages 1 and 2, Busch took over the lead when he stayed on the track while most of the others pit. Snider, who also stayed out, lined up second and Haley, the first off pit road, lined up third on the restart on Lap 20.

During the stops, Johnny Sauter was penalized for speeding on pit road and had to restart from the rear of the field.

With five laps left in Stage 2, Busch held a slight advantage over Jones as Sargeant moved into the third position. Gilliland was in fourth and Nemechek was fifth.

Jones got around Busch with four laps remaining to take the lead for the first time in the race. Shortly after that, Sargeant dove down pit road to make a green-flag pit stop.

Jones and Busch elected to make green-flag stops with three laps remaining, which allowed Friesen to move up and into the lead for the first time in the race.

Gilliland blocked a charge from Haley on the final lap to claim the Stage 1 victory, his first stage win of the season.

Busch took command early in the race, grabbing the lead from his teammate, Gilliland, on Lap 2.

With 10 laps remaining in the first stage, Busch had moved out to about a one second lead over Gilliland with Haley close behind third. Jones had already made his way up to 11th.

With four laps left in the stage, Brett Moffitt dropped to pit road with what appeared to be an engine issue. He ended up taking his No. 16 Toyota to the garage.

Busch made a green-flag pit stop with three laps remaining, which allowed Gilliland to retake the lead.

Gragson was not medically cleared to compete in the race and Jones drove the No. 18 Toyota in his place. Since Gragson did not compete in qualifying, Jones also started from the rear of the field.

Noah Gragson to sit out Saturday's Truck race due to illness