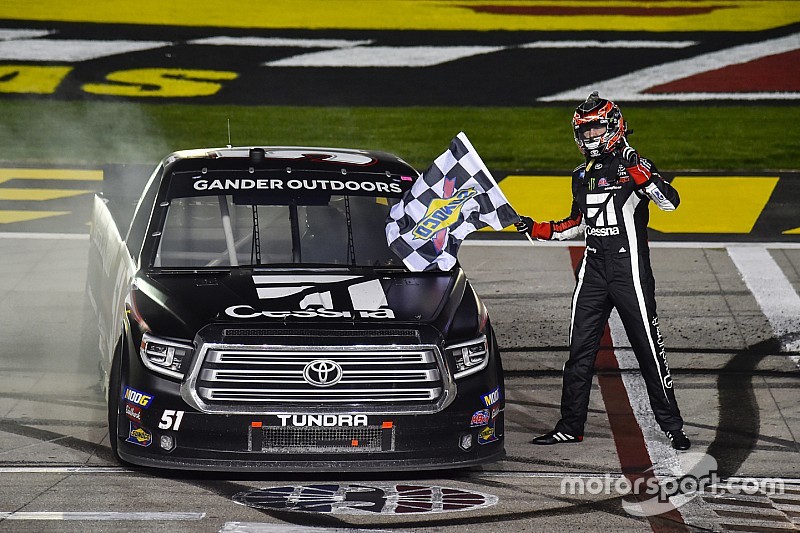 Kyle Busch completed a sweep in the NASCAR Truck Series race for the second consecutive week.

Busch won the first two stages and was able to hold off a spirited challenge from Brett Moffitt to win Friday night’s Strat 200 at Las Vegas Motor Speedway, sweeping the stage wins and the race victory for the second straight week.

Busch, who is running in all three races this weekend, picked up his 53rd career win in Trucks, the most of any driver. He led 111 of the 134 laps in the race.

“It’s cool to win here in my hometown of Las Vegas, starting off a triple weekend. Hopefully, we can keep it going.”

Busch is running in all three races this weekend.

“I think the hardest one may be the second one, but I don’t know,” he said. “We obviously had a really fast truck tonight. We worked really hard to get it there. We didn’t start great in practice but overall, I’m proud to be in Victory Lane.”

Moffitt actually got to Busch’s rear bumper with about 15 laps remaining in the race but lost the handling on the front of his truck and lost considerable ground.

“I got to back of Kyle and I just got loose,” Moffitt said.

Rounding out the Top 10 were Sheldon Creed, Todd Gilliland, Johnny Sauter, Ryan Reed and Ross Chastain, who rallied to 10th after stalling his truck on his final pit stop.

With 30 laps remaining, several drivers headed down pit road to begin a round of green-flag pit stops.

Once the cycle was completed with 18 laps to go, Busch emerged with a small lead over Moffitt. They were followed by Crafton, Friesen and Burton.

With five laps remaining, Busch had opened up a more than two-second lead over Moffitt.

Following the break between Stages 1 and 2, Friesen was the first off pit road and led the way when the race went green on Lap 38.

Moffitt had a prolonged pit stop as his air hose got caught under his right-rear tire. He restarted in 23rd.

With 20 laps remaining in the second stage, Friesen held a small lead over Gilliland. They were followed by Busch and Rhodes.

Busch had made his way to second and was chasing Friesen down for the lead with 10 laps to go in the stage.

On Lap 55, Busch went to the inside and got around Friesen to retake the lead.

Kyle Busch led every lap on his way to the Stage 1 victory.

Busch, who started on the pole, grabbed an early lead at the green-flag.

On Lap 6, Creed got loose and made contact with Reed to trigger a wreck that also collected Chastain, Cory Roper, Rhodes and Crafton.

The race returned to green on Lap 11 with Busch still in the lead, followed by Moffitt and Burton.

With 15 laps remaining in the first stage, Busch maintained a small advantage over Moffitt and Burton and Hill battling for third.

Busch extended his lead to more than a second with five laps to go in the first stage. Hill was third and Burton fourth.

Grant Enfinger had to start the race from the rear of the field after his team changed engines during practice on Thursday.

NASCAR Mailbag: Where is the advantage?