Matt Crafton doesn’t see himself as a championship dark horse

He doesn’t bristle but you get the idea Matt Crafton doesn’t take kindly to the term “dark horse” when asked about his title chances in this year NASCAR Camping World Truck Series playoffs. 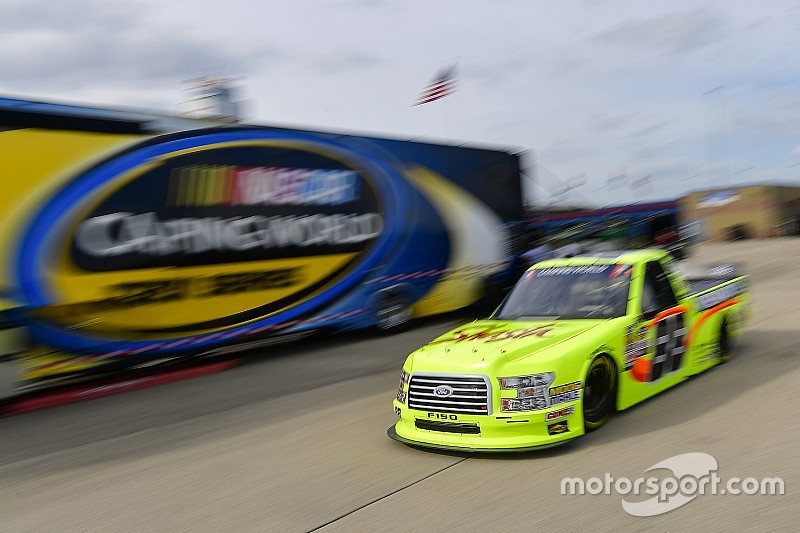 “I won a couple of championships,” he reminds the interviewer. “The following year we won six races and just came up short.”

All of that is true, of course, but the fact remains that Crafton, 42, and his Thorsport Racing Ford team have yet to find their way to victory lane this season.

A winner 14 times in 423 starts in the series, Crafton heads into this year’s Playoffs shadowed by a 28-race winless streak that dates back to July of ’17.

He is one of three drivers in this year’s eight-team field without a win.

None of that matters, according to Crafton.

Nor does the switch to Ford, a move that came after a six-year association with Toyota.

“I don’t think it’s that (manufacturer change),” he said.

Fords haven’t been shut out this year, ThorSport teammate Ben Rhodes won at Kentucky while Chase Briscoe turned a lone start with the group into a victory at Eldora Speedway. But Chevrolet and Toyota teams have split the remaining 14 races with seven wins apiece.

“The trucks have about another 800 pounds of downforce, you go a lot faster through the corner so we can’t really even use the Cup tire pressures and SIM stuff that they get. We have to come up with our own stuff and do our own stuff; we had a pretty good notebook of all the old stuff and we ran very well with it. This stuff, the new tires have just kicked out butt, without a doubt.”

In need of better results

There have been notable runs – he has no poles but has qualified No. 2 three times this year and his last five finishes have been 10th or better.

Getting through the first round, which consists of stops at Canadian Tire Motorsports Park (Sunday, 2:30 p.m. ET, FS1, MRN), Las Vegas Motor Speedway and Talladega Superspeedway, will be critical. Crafton has yet to win on any of the three tracks that host the opening round.

However, he has multiple victories at two of the three second-round stops, Martinsville and Texas. His average finishing position of 9.9 at ISM (Phoenix) Raceway isn’t his best but it’s solid enough to keep him in the hunt should he make it that far.

Rival Johnny Sauter won the title in ’16 and goes in as the No. 1 seed but he cautions that anyone in the Playoff field, Crafton included, could win this year’s championship.

“Because a few years ago, the very first playoffs for the Truck series, or one of the first, nobody looked at us as a favorite – we had won one race or whatever – and we got hot when it mattered,” Sauter said. “I don’t think anybody that year would have said that we were a favorite.

“I think anybody can win at any given time. That’s how competitive this is.”

Crafton isn’t exactly anybody and while it’s been a bit of a learning experience this year, he’s in the playoffs and that’s what matters.

His team has improved, he said, and they’re figuring out what they don’t know and making changes and adapting and “we just keep understanding (the tires) better and better each week.”

He may not be the favorite but he’s been here before and he certainly doesn’t lack experience.

How far such things will take him will be known soon enough.

GMS Take on Trucks: Sauter and Haley ready for playoffs

Matt Crafton: 2019 Truck title was about "winning the war"