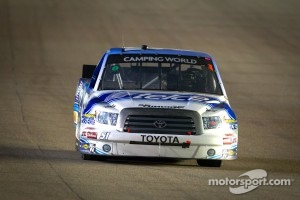 MOORESVILLE, N.C.- Kyle Busch Motorsports (KBM) announced today that it will field a second entry in the NASCAR Camping World Truck Series with three-time NASCAR Mexico Series champion Germán Quiroga in four races this season. Quiroga will pilot the No. 51 Tundra with primary sponsorship from prepaid wireless provider NET10® beginning at Talladega (Ala.) Superspeedway on Oct. 6, and concluding with the final three stops on the schedule; Nov. 2 at Texas Motor Speedway in Fort Worth, Nov. 9 at Phoenix (Ariz.) International Raceway and Nov. 16 at Homestead-Miami (Fla.) Speedway.

Quiroga, the only driver in the history of the NASCAR Mexico Series to win multiple championships, captured three consecutive titles from 2009 to 2011 after finishing in the runner-up spot in the final series standings in both 2007 and 2008. After the Mexico Series became officially sanctioned by NASCAR in 2007, the talented wheelman collected 16 wins, 52 top-five and 60 top-10 finishes over 70 starts.

The 32-year-old posted a respectable 16th-place finish in his Truck Series debut with KBM at New Hampshire Motor Speedway in Loudon last September, and then finished 26th - after losing a lap due to a loose wheel - in the 2011 series finale at Homestead-Miami (Fla.) Speedway. In 2007, the Mexico City native led 12 laps in his lone NASCAR Nationwide Series start before being relegated to a 28th-place finish at his home- country track, Autodromo Hermanos Rodriguez.

"I am very grateful to NET10 for making it possible for me to get back in the No. 51 Toyota for KBM," Quiroga said. "In Mexico I am accustomed to winning races and competing for championships, and that is exactly what KBM does in the Truck Series. I'm very proud of all that I accomplished in the NASCAR Mexico Series the last five seasons, but I am ready for a new challenge. I moved to the United States earlier this year and I'm fully committed to becoming a successful driver in the Truck Series -- with hopes of making my way up the ladder to the Cup Series. It will be a difficult task, but once I am able to achieve success here, I am hopeful that it will provide other drivers from the Mexico Series with opportunities here in the future. My friends and family back in Mexico fully support me, and although they are not with me in Charlotte, NET10 makes it is easy for me to stay in touch with them through their unlimited international calling plan."

"We're excited to have NET10 onboard as a partner and honored that they chose KBM for their first partnership in NASCAR," said KBM General Manager Rick Ren, who will also serve as the crew chief on Quiroga's No. 51 Tundra. "Germán showed a lot of promise in his two starts last year and our staff has been working really hard to try and secure the sponsorship needed to get him back in a truck this season. Last year, he ran with us around his NASCAR Mexico Series schedule, where this year he has dedicated himself to giving everything he has to our Truck Series team. He's attended several Truck and Nationwide Series races the last few months and I think he's learned a lot just by listening to Kyle (Busch), Kurt (Busch) and Jason (Leffler), which has allowed him to get more accustomed to the terminology we use, as opposed to what he was used to in Mexico. You'll see a more comfortable Germán this year and I'm confident that the results will be much improved."

A NET10 spokesperson said: "NET10 has always appealed to the fans of NASCAR and its Camping World Truck Series by providing no contract wireless service on America's best networks for half the cost. We could not ask for better partners than the Kyle Busch Motorsports team and its sponsorship of Germán Quiroga, who is one of the most promising drivers in the hemisphere.NET10 believes that success comes when strong team support meets new opportunity. Like millions of others, Germán Quiroga is blazing a new trail in the United States, which is where NET10 comes in by helping to connect people with their loved ones back home through affordable, reliable, and unlimited international wireless plans. NET10 looks forward to supporting Quiroga and KBM as they tackle four of the most challenging race tracks in the NASCAR Camping World Truck Series."