The French driver will compete in the Truck series.

MOORESVILLE, NC – February 4, 2014 – SS Green Light has had many drivers behind the wheel over the last thirteen NASCAR Camping World Truck Series seasons, but Daytona will mark a first for the veteran team as Michel Disdier a native of Nice, France will take the wheel of the No. 07 Chevy Silverado for the season opening Nextera Energy Resources 250 on Feb 21st at the Daytona International Speedway. 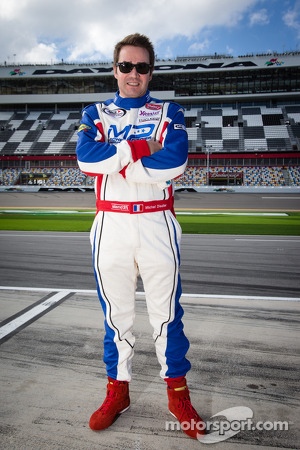 Disdier is a second-generation driver who has raced throughout Europe in numerous types of vehicles for nearly twenty years. For the last ten years he has been pursuing his dream of becoming a NASCAR championship caliber driver competing on the high-speed tracks in the United States. The French driver's resume is deep; racing or testing in Formula Renault, Formula Ford, Formula 3, Formula 3000, Formula Nissan, Formula France and Ferrari Challenge after his early beginnings racing motorcycles in his homeland.

As a boy Michel visited the USA during a school exchange program; His host family lived in North Carolina in the heart of NASCAR country where his passion to become a NASCAR driver was developed and is sill alive today.

Michel’s first race in North America was in the NASCAR Canadian Tire Series back in 2007 and since then the French native has made eleven starts in the ARCA Series over the last six seasons with a best finish of eleventh last year at Daytona.

“I have been racing for many years and it is my passion,” said Disdier. “Since I was a boy I have dreamed of racing in NASCAR and everything I have done since then has been directed at realizing my dream. In a few weeks my dream will come true and to describe the excitement I now feel is impossible.”

SS Green Light Racing team owner Bobby Dotter brought Disdier to the NASCAR Preseason Thunder test last month where he received his NASCAR approval to race on superspeedways. The veteran owner/crew chief will call the shots for Didier’s NASCAR super speedway debut at Daytona. “We had a solid test several weeks back and Michel did a nice job with very limited seat time and seemed to pick-up the draft quickly. He has a lot of passion for racing and we are pleased to be part of his NASCAR debut. I believe that he will do a good job for us at Daytona.”

SS Green Light Racing has established itself, as one of the longest tenured teams in the NCWTS with 313 consecutive starts with numerous top-fives and a second place finish last season at Talladega. The team has amassed nearly 600 starts over the last 13 seasons.

Daytona will mark the beginning of Michel Disdier’s dream of becoming “A Frenchman in NASCAR.”