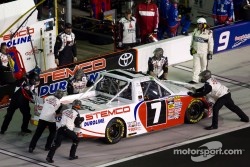 DARLINGTON, S.C. (March 13, 2011) - Red Horse Racing rookie driver Miguel Paludo had high hopes for the NASCAR Camping World Truck Series Too Tough To Tame 200 at Darlington Raceway, especially after quickly getting up to speed in pre-race practice. But those hopes were dashed by another driver with an unfortunate accident early in the 147-lap race. And by early, we mean in the first turn on the first lap.

Paludo and the Rick Gay-led crew didn't give up, and the No. 7 STEMCO-Duroline Toyota Tundra continued to a 27th-place finish after completing 135 laps. That wasn't what anyone wanted, but Paludo and the team used the adversity as a learning experience, trying to get the truck faster despite its heavy damage.

That wasn't nearly what Paludo had hoped for before the race. The 27-year-old Brazilian was making his first appearance at the famed 1.366-mile track, and he began the weekend by taking some laps in a NASCAR pace truck with Red Horse Racing Competition Director Terry Cook (a former truck series driver) and met with fellow Toyota driver Todd Bodine the day before the race.

Paludo then made his first laps at speed during Saturday's two practice sessions, gradually learning the track while he and Gay worked on the truck's handling.

By the end of the final practice, Paludo got comfortable enough to post the 10th-fastest speed of the 38 trucks entered.

Paludo qualified 14th and planned to take the first 20 laps learning to race in traffic, but he never got the chance.

"My confidence was pretty high," Paludo said. "I knew at the start that there was going to be a lot of traffic, and I was going to be a little patient. I would've been a little cautious on the first 20 laps or so, just to see how the traffic was, and then try to move forward. But we didn't have time."

As the field entered Turn 1 just after the green flag, Paludo's truck was struck in the left rear by a veteran driver, sending the No. 7 sideways and into the wall.

"Something like this is frustrating because we had a fast truck," Paludo said. "You couldn't show, even for five laps, how you were in the race. It is really frustrating, but that's part of this deal. You have to know how to put it behind you and move forward."

The right rear of Paludo's truck was heavily damaged, and Paludo could only limp around at a reduced speed for the rest of the race. Plus, the accident opened up the cockpit to outside air - and debris - and Paludo's sparkling white firesuit was covered in tire rubber and dirt after the race.

Still, Paludo practiced "perseverança" - Portuguese for perseverance - for the two-hour race. A damaged truck is not an easy vehicle to drive, and Gay and the No. 7 crew continued to work on it throughout the race despite being several laps down.

"I learned how to try to run fast laps with a torn-up truck," Paludo said. "The truck was very, very loose after the accident, but Rick and the guys made changes every time we stopped to try to make it better. No one wanted to be in that position, but every lap we make on the track is a learning experience, and we learned as much as we could tonight."

Paludo managed a smile after the race, though it clearly masked his frustration over the lap-one, turn-1 crash.

"I didn't expect that, for sure," Paludo said. "This veteran is a very experienced driver. He went straight to my door, and then I hit the wall and turned sideways. Then, everything starts.

"It's hard when you get caught up in a wreck early in a race, but when it's the first corner, it's more frustrating. We had an awesome

Toyota Tundra today before the race, and I knew I could be at least a top-10 tonight. But we have to pick up the points, learn about it, and go to Martinsville."