Myatt Snider: "You can't give up because of a bump in the road" 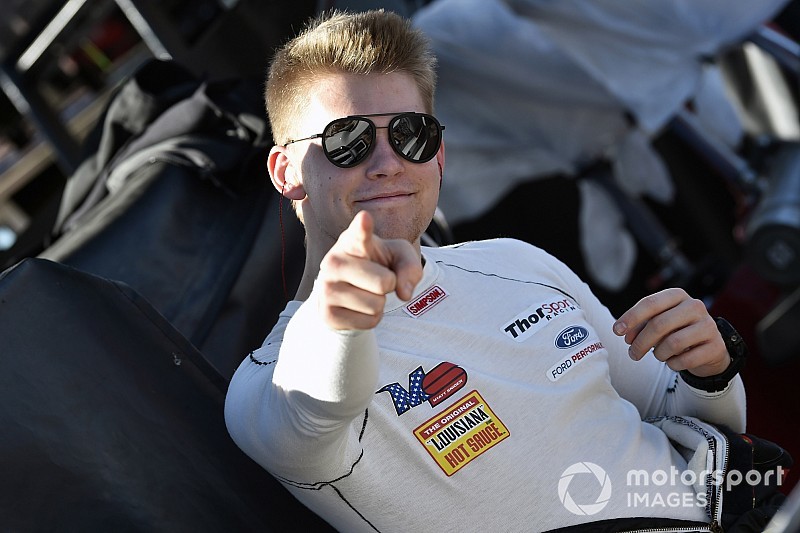 Myatt Snider has no idea how many opportunities he will have in the NASCAR Gander Outdoors Truck Series this season so he plans to maximize each one.

Snider, the Truck Series’ rookie of the season in 2018, expected to be racing fulltime once again for ThorSport Racing in 2019.

However, the last-minute return of veteran Johnny Sauter to the organization left Snider with a part-time ride and no firm commitment on the number of races he’ll compete in this season in the No. 27 Ford.

I think we have a really good chance this weekend ... These were the best practices I’ve ever had at Martinsville

Snider ran the season-opener at Daytona – where he was collected in an early accident – and will get his second opportunity in Saturday’s TruNorth Global 250 at Martinsville (Va.) Speedway.

“Racing in NASCAR is still my No. 1 priority,” Snider said Friday. “I’ve been working toward this for years. You can’t just give up because of a bump in the road.

“We’re trying to dig and get as many leads as we can, keep me afloat and keep me racing and hopefully I’ll be able to get make to fulltime racing in 2020. It’s just part of it – you take what you can get and do your best with it.”

Martinsville should provide Snider with an excellent opportunity to shine.

In his rookie season last year, Snider was finished sixth in the spring and third in the fall race at Martinsville, including leading seven laps. He also has experience on the track competing in Late Model stock cars.

On Friday, Snider was third and sixth-fastest in the two practice sessions.

“You can’t squander any opportunities you get to perform at your best,” Snider, 24. “I’ve always looked forward to Martinsville, it’s one of my home tracks and one of my best tracks. Short track racing is what I grew up doing.

“This place always provides such good racing in my opinion. To be able to run here and run a truck for ThorSport Racing, a group that I’ve built an awesome rapport with, is an awesome feeling.

“I think we have a really good chance this weekend. These were the best practices I’ve ever had at Martinsville – p3 and p6 – and I think I could have gotten more out of it. To have such a good truck makes me really excited for (the race).”

Although he has no definitive calendar at the moment for his Truck schedule, that doesn’t mean Snider is focusing on NASCAR competition any less.

He plans to attend as many races as he can this season with ThorSport – including next weekend at Texas Motor Speedway. He has also returned as a part-time student at UNC Charlotte and continues to work on getting his pilot’s license.

“I want to try to keep my core group together but it’s also important to learn. As the season goes on, things change,” he said. “We saw that last year with the splitter rules and all that. It’s important to keep up with how the garage is flowing, not just in people terms but in race car terms.

While the 2019 season may not be evolving as he hoped, Snider remains determined to make the most of it.

“Definitely toward the end of last year, I feel like we were in championship mode even though we weren’t a contender,” Snider said. “So, if I continue to improve on some of the things this year that I may have lacked in 2018 then I definitely think we can contend for a championship in 2020.”