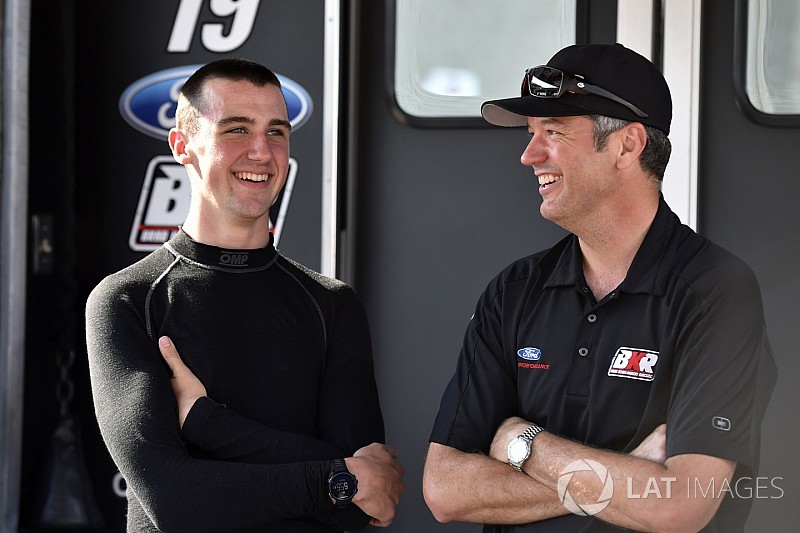 Brad Keselowski Racing General Manager Jeremy Thompson returns to his home state this weekend with one of his team’s trucks still alive in the NASCAR Camping World Truck Series playoffs as the team enters the weekend of its 300th start.

Although they just have three races remaining before the team ceases operations at the end of the NASCAR trucks season, Brad Keselowski Racing enters this weekend’s race at Texas Motor Speedway one truck in the midst of a championship hunt and the other tuck more than capable of picking up a win.

That makes Thompson very happy and very proud of the effort of everyone on the BKR team.

“To see the amount of effort Austin [Cindric], Doug [Randolph] and the entire team ha put into the playoffs, and to still be alive and in contention for the NASCAR Camping World Truck Series championship, I couldn’t be more proud of the entire organization.”

Knowing that his employees will have to find another job in just a little over a month is something that could distract any one; however Thompson said that’s not been the case when it comes to preparing the trucks and on-track performance.

“We went to Canada the week after we told the team would cease operations and got a pole and a win, and we’ve followed that up with both Austin and Chase [Briscoe] making the playoffs and Chase winning the pole last week at Martinsville Speedway,” said Thompson. “Many people would just pack it in, but nobody on this team has done that and I’m really proud of everyone.”

One employee in particular Thompson mentioned was Shane Whitbeck. Whitbeck currently serves as Assembly Shop Manager and has been with team owner Brad Keselowski and his teams since the inception of BKR, and also worked on Keselowski’s ARCA and K&N Pro Series efforts.

“Shane has been with the team since Day 1 and done a great job,” Thompson said. “He’s been a part of every car or truck fielded by BKR, even before this team was officially created.”

This weekend is also a homecoming for Thompson who was born and raised in Henderson, Texas before he decided to make the move East and work in NASCAR.

“It’s always neat for me to go back with the team to Texas Motor Speedway,” said Thompson. “When I was racing in Texas and we would go back home after a race, we would go by the speedway while they were building it just to see the progress.

“I remember going there for the first event and watching Jeff Burton win that first race held there. Everyone embraced that track and I’ve always loved it.”

As for his team, he can’t explain why the BKR trucks have always ran well there, but he’s happy they have in almost every truck race.

“We haven’t won a race there yet, but we’ve won poles and led a bunch of laps with several drivers in different stages of the track’s history,” he said. “We were fast there on the old asphalt, then they paved it and we were still fast, and we also have run well since they changed toe configurations in the turns.

“Sometimes a track and a team are a good fit..”

Thompson and the entire BKR team have plenty to race for the weekend with Cindric in the playoffs and Briscoe still searching for his first win.

“One thing is sure about this team, we’re going to give it all we have to help Austin keep racing for a championship and help Chase get his first win in a truck like Austin did a couple of months ago.”

Which Truck title contenders have the best shot to win at Texas?