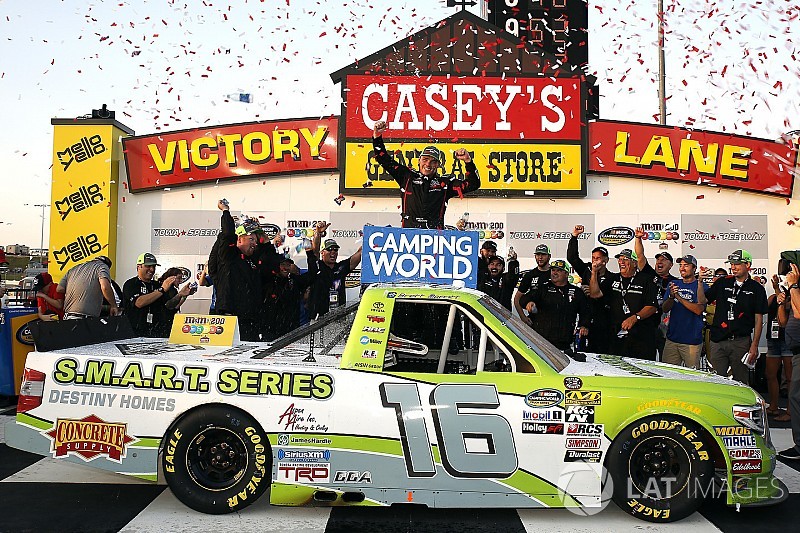 Brett Moffitt held of a last-lap charge by Noah Gragson to pick up his second win of the season and first in his home state in wild finish for the NASCAR Camping World Truck Series at Iowa Speedway.

After some hectic early battling up front between four trucks, John Hunter Nemechek passed Matt Crafton on Lap 50 and stayed out front for the next 10 laps to win the first stage of the race. The opening segment featured a pair of caution flags.

Harrison Burton controlled the race at the start after scoring his first career pole over CWTS veteran Matt Crafton.

Burton was leading the race when his Kyle Busch Motorsports teammate Todd Gilliland brought out the first caution of the race when he made heavy contact with the wall on Lap 25. He was running third.

After the restart of the race on Lap 30, Crafton took the lead on Lap 31 just before a four-truck incident brought out the second yellow flag of the race when Austin Hill, Grant Enfinger, Christina Eckes and Ben Rhodes came together

Crafton led the next 19 laps before Nemechek took over for the final 10 circuits of the stage.

Burton, who finished third in the segment, experienced trouble with his throttle at the end of the stage, forcing him to pit road while the pits were still closed. He was consequently forced to restart from the rear of the field.

Crafton beats the field off of pit road during pit stops and led the field to green for the second stage of the race.

Just as Stage 1 produced several battles for the lead, the start of Stage 2 was equally as exciting as Crafton was passed by Noah Gragson on the restart and led the next seven laps until John Hunter Nemechek regained the top spot on Lap 76.

His lead was short-lived as Friesen passed him on Lap 77, claiming control of the race.

Friesen was able to hold off Nemechek on a six-lap dash to the end of the segment after Gilliland made contact with the outside wall once again, ending his night for good after suffering heavy damage to his KBM machine.

Friesen was followed by Nemechek, Moffitt, Gragson and Myatt Snider in the top five.

Burton rebounded from his early problem and a pit stop penalty to finish sixth in the second segment.

Sauter, who entered the night winner of the past two truck races, was battling an ill-handling truck throughout the segment and was able to finish eighth in the segment.

Moffitt led the field to the green flag for the start of the final segment and was out front when a five-truck incident on Lap 136 took out several contenders.

Crafton and Friesen made contact while battling for position, which led to Crafton eventually cutting a left front tire that sent him up into Nemechek and collecting Friesen, Rhodes and Sargeant.

Friesen stayed on the lead lap while Rhodes and Sargeant were able to continue in the race several laps down. Crafton's race was over.

Moffitt led the entire stage, but he needed to hold off a hard-charging Gragson on the final lap. Gragson dove to the inside of Moffitt in Turn 3, but his momentum carried him up into the outside wall. Moffitt cut back under him and earned his thiid career CWTS victory and second this season.

It was his second win of the season and first at his home track for the Grimes, Iowa native.

Burton rebounded to finish third with David Gilliland and Sauter rounding out the top five.

Jesse Little was sixth with Cody Coughlin seventh. Christian Eckes and Friesen came back from earlier incidents to finish eighth and ninth, respectively, while Snider completed the top 10.

Moffitt needs sponsor dollars, but can "compete for a championship"