Matt Crafton relishes "out of the ordinary" Truck victory at Eldora 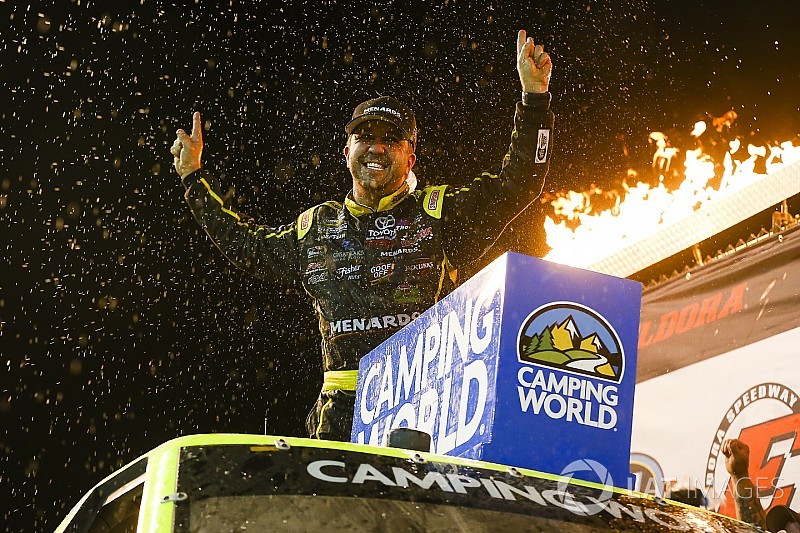 This season, Matt Crafton will take victories in the NASCAR Camping World Truck Series anywhere he can get them.

It’s been a difficult year for the veteran and two-time series champion, not because he was in danger of missing the playoffs – he was fourth in the series standings – but the results from his No. 88 ThorSport Racing team have been very inconsistent.

He had two top-five finishes in the first 10 races but also finished 14th or worse three times and had led more than 20 laps in a race only twice.

To add to the frustration, he hadn’t won in over a year.

The annual Eldora Dirt Derby didn’t stick out as a turning point for a season for a driver who had never won a dirt race, but you never say never.

“This definitely wasn’t the one that I thought was going to put us in the playoffs without a doubt. I was looking to come in here and have a top five – a good solid top-five run,” Crafton said after his victory Wednesday night. “I just learned how to drive it. Rico (Abreu) and Christopher (Bell) went by me up top and I just had to save my stuff and just had to have something to race there at the end.

“I knew I just couldn’t put it up top like Rico – just kept pounding the fence. He was putting on a heck of a show without a doubt. I just kept saying, ‘I can’t do that yet. I got to have something here at the end to race these guys.’

“When the pay window opened, I finally put it up there and took advantage of it.”

By the end of the race, Crafton was out-dueling Stewart Friesen and Chase Briscoe, two drivers with extensive dirt racing resumes.

Although Eldora wasn’t marked on the schedule as a likely candidate to end his 27-race winless streak, Crafton’s crew chief, Junior Joiner, was insistent the half-mile dirt oval was as good a place as any to find Victory Lane again.

“To just shut up all the critics per say and put us back in Victory Lane after a year, it means a lot to this team because we need to get on a roll right now and that’s what I told the guys before the race started,” Joiner said.

“I said, ‘We’re going to turn this year around right now, today’ and low and behold he did. I think that we’re going to head on an upward climb now and we’ll keep digging like we always do.”

Crafton, 41, didn’t win his first series race until his eighth full-time year in the series, but the last four seasons have included 11 victories and two series championships.

A year without a win was starting to weigh on his mind.

“You always go ‘Dang, is it going to come again? What am I doing wrong? What are we doing wrong? What do I have to change?’ I knew we would (win) because there was spots this season where we had speed,” Crafton said.

“Me and Junior just keep working really, really hard week-in and week-out and every one of these guys just keep digging really hard trying to make these trucks better on the half-mile to the mile-and-a-halves.

“It definitely ranks up there amongst one of the greatest wins I’ve had so far just because it’s something so out of the ordinary.”